This is a sun and immortal birds gold ornament. It has a 12.5 centimeter outer diameter, 5.29 centimeter inner diameter, 0.02 centimeter thickness,20 gram weight,and 94.2 percent gold content. It has two portions with sacred images. In the middle is a sun with 12 rays, and around the sun, four immortal birds fly counterclockwise. On August 16, 2005, the sun-and-bird gold image was declared the symbol of Chinese Cultural Heritage by the State Bureau of Cultural Relics. It was unearthed in Jinsha site on Feb, 25, 2001. The sun bird is the totem of the early tribes of the ancient Shu. The Sun and Immortal Birds Gold Ornament is likely to be a treasure left over from the grand sacrificial ceremony held by the ancient Shu king, reflecting the worship of the sun and sunbirds in the ancient Shu area. 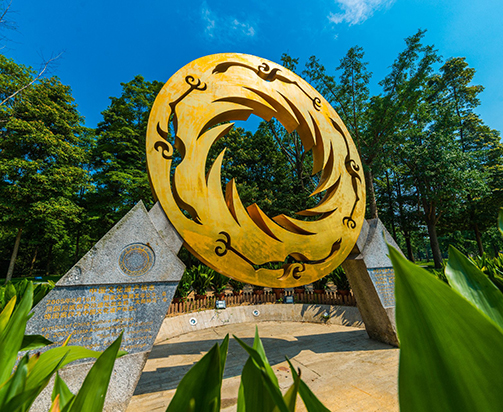 The Sun and Immortal Birds Gold Ornament has refined shapes, smooth lines and rigorous composition. It implies the pursuit of light, forging ahead, unity, harmony and tolerance. Also, it reflects the philosophical thought that "heaven and man are one" from ancient China. Therefore, it was selected as a symbol of Chinese cultural heritage in 2005. 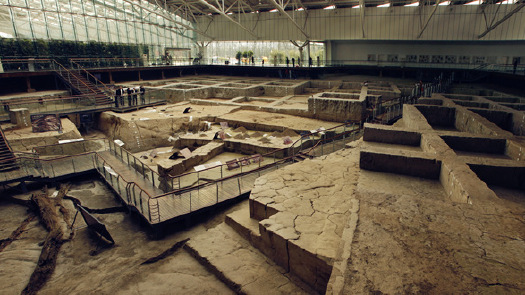 The Jinsha site was unearthed in February 2001 in Chengdu in an area spreading across about 5 square kilometers. It was the capital of the ancient Shu state, the center of the ancient civilization in the upper reaches of the Yangtze River from the 12th century BC to the 7th century BC. The excavation marks the first major archaeological discovery in China in the 21st century. Among the important relics unearthed at Jinsha site are large-scale areas for building, sacrifice-offering area, general residential sites, large-scale cemeteries, and more. Among the unearthed precious cultural relics are gold, bronze, jade, stone and ivory objects and lacquerware, tens of thousands of pottery pieces, tons of ivory, and thousands of wild boar tusks and antlers. The site might be the only one in the world with such a copious quantity of gold and jade objects and the bountiful amount of ivory objects. It is clear now that the main cultural relics of the Jinsha site date to the period from the late Shang Dynasty to the Western Zhou Dynasty. It was highly possible another political, economic, and cultural center rose on the Chengdu Plain after the decay of the Sanxingdui civilization, the capital of ancient Shu state in the same period and one of the most important sites of the pre-Qin period in China. In April 2007, a museum focused on the three-thousand-year history of Chengdu soared skyward on the site. Containing remains from the Jinsha site, the museum serves to protect, research, and display the Jinsha culture and ancient Shu civilization. The museum sits on 300,000 square meters of land. It has a Relics Hall, Exhibition Hall, Tourist Center, Cultural Relic Protection and Restoration Center, theater and garden area. The total construction area is 38,000 square meters. With multiple functions of education, research, and entertainment, this modern garden-style museum has become an iconic landscape marking the long-standing history of Chengdu. Another important cultural relic is this gold mask. It is 11 centimeters by 19.5 centimeters by 0.04 centimeters. It has a rectangular face with a flat forehead, convex eyebrows, big eyes, a high bridged nose, and rectangular ears with piercings. It seems to have a dignified appearance. So far, this is the biggest and most well-preserved gold mask from this period in China. (Compiled by Ma Sijie)