More than 100 Chinese filmmakers convened a gala on Tuesday to mark the 70th anniversary of the founding of the People's Republic of China, the event to be broadcast during the National Day holiday. 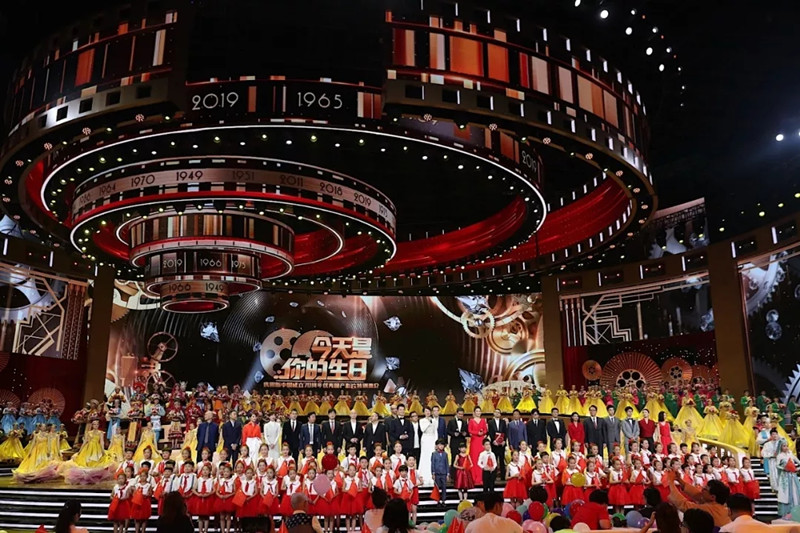 Filmmakers and performers gather on stage during the filming of the gala of "Today Is Your Birthday: Special Presentation of Excellent Domestic-made Films to Celebrate the 70th Anniversary of the Founding of the People's Republic of China" in Beijing, Sept. 10, 2019. (Photo courtesy of China Movie Channel)

The gala, literally named "Today Is Your Birthday: Special Presentation of Excellent Domestic-made Films to Celebrate the 70th Anniversary of the Founding of the People's Republic of China", was designed to promote seven key Chinese films - "The Climbers", "The Captain", "Me and My Motherland", "Mao Zedong 1949", "The Bugle from Gutian", "The Secret of China" and "The Bravest".

The first three films will hit local theaters on Sept. 30, the eve of the National Day, while "Mao Zedong 1949" will be screened the previous week, on Sept. 20; the remaining three have already been released with "The Bravest" performing the best in the market by earning 1.68 billion yuan ($235.82 million) so far.

However, the eyes of the whole country will be on the three major films during the National Day holiday: "The Climbers" directed by Daniel Lee, starring Zhang Ziyi, Wu Jing, Zhang Yi, Jing Boran and Jackie Chan, tells the story of China's first national mountaineering team to conquer Qomolangma, known in the West as Mount Everest.

"The Captain", directed by Andrew Lau and starring Zhang Hanyu and Yuan Quan, is a Chinese counterpart to the American drama "Sully", based on the real experiences of Sichuan Airlines captain Liu Chuanjian, who saved the lives of 119 passengers with his calm handling of an emergency landing on May 14 last year.

"Me and My Motherland", directed by Chen Kaige and six other prominent Chinese directors - Xu Zheng, Ning Hao, Guan Hu, Zhang Yibai, Xue Xiaolu and Wen Muye – is a combination of seven short films focusing on ordinary Chinese individuals who have grown up with China and experienced seven significant historic moments. It has an all-star cast including Wu Jing, Ge You, Huang Bo, Simon Yam, Tong Liya and Zhang Jiayi.

These tent pole productions will no doubt dominate the National Day film season, while Huang Jianxin and Ning Haiqiang's "Mao Zedong 1949" will be the forerunner to revisit history on the eve of the People's Republic of China founding on Oct. 1, 1949, showing the founding fathers, particularly Chairman Mao Zedong, preparing to establish new country while meeting at a villa in Beijing's Fragrant Hills.

Posters of three tent pole films - "The Climbers", "Me and My Motherland" and "The Captain" – to be screened during China's 70th National Day holiday.

Cast and crew of all these seven films, as well as the prototype figures who inspired them, joined the gala with generations of Chinese filmmakers and performers, paying tribute to the country, its heroes, common people and the fast-growing Chinese film industry in their special way. Actors reenacted the film scenes adapted from history on stage, while directors and producers shared their insights, emotions and their own perspectives on Chinese history in the past seven decades.

So far, on the chart of all-time box office top grossers, there are four domestic-made films soaring into the top five, "Wolf Warrior 2" (ranked No.1), "Ne Zha" (2), "The Wandering Earth" (3) and "Operation Red Sea" (5), the gala organizers announced.

They added that the past glories witnessed by the Chinese people had been captured through the efforts of Chinese filmmakers using their outstanding works to shape China's image, spread the nation's voice, carry forward the spirit of craftsmanship, and inherit Chinese aesthetics, while in the future, Chinese filmmakers would surely continue to climb to new creative peaks.

The gala will be broadcast first on CCTV-3 and China Movie Channel (CCTV-6) on Sept. 28 and will be replayed on Oct. 2 on the same two channels.