Over 200 teams to join largest Dragon Boat race in US 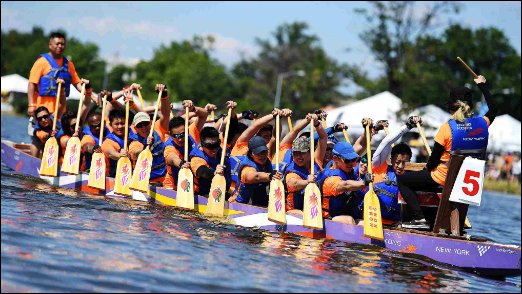 Participants rowed their boat back to the dock after competing in a race in the 27th Annual Hong Kong Dragon Boat Festival on August 13, 2017. (Photo: VCG)

Over 200 teams will paddle across the Meadow Lake at the Corona Park in New York City's easternmost borough of Queens as the 28th Annual Hong Kong Dragon Boat Festival takes place on August 11-12.

With a record number of teams participating 200 plus well-trained teams, involving more than 2,500 participants competing from across the United States and Canada, this year's festival is expected to be notable in its scale and fierce competition, said the festival host committee.

The festival, to be staged on the site of the 1964 World's Fair, also features events for the entire family: traditional Chinese arts, martial arts, the Dragon dance, musical and demonstrations of folk arts and crafts.

An International food court, and booths staffed by sponsors of the event, many of whom will be giving away promotional items, and many community-based organizations participating help make for a unique, action-packed, multi-cultural weekend.

The opening day parade will be held at noon on Saturday, August 11. The US Dragon Boat Open Championship finals will be held Saturday and Sunday, with the teams vigorously competing for their share of the awards.

The first Hong Kong Dragon Boat Festival was organized in 1991. Since then, the festival has grown and evolved into one of the largest multi-cultural festivals in the New York metropolitan area.

The event keeps up the age-old tradition of dragon boat racing in colorful, custom-made teak boats, which are virtual works of art gliding on water. Custom made by a small coterie of craftsmen in Hong Kong, weighing one ton each, colorfully painted with a Dragon head at the front and Dragon tail at the rear, the boats are piloted by up to 20 crewmen, including 18 paddlers, a drummer, and steers person.

The tradition of Dragon Boat Racing is an annual Chinese rite commemorating the idealistic poet Qu Yuan who drowned himself in the third century B.C. to protest against his emperor's policies. The locals raced in their boats in an attempt to rescue the poet. To prevent fish and water dragons from eating his body, the locals beat their drums and splashed their paddles. This was the beginning of Dragon Boat Racing.