CULTURE Over four marathons per day in China in 2018: report

Over four marathons per day in China in 2018: report 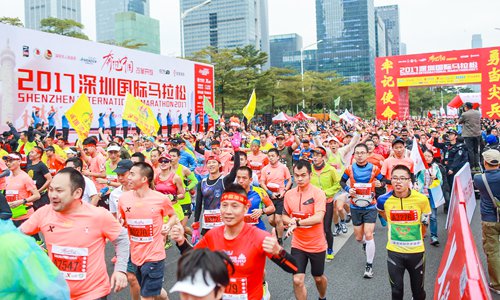 Runners during a marathon in Shenzhen. (Photo: GT)

China has held 1,581 marathons and relevant sports events, or an average of 4.3 races per day, in 2018, according to an annual report of the Chinese Athletic Association (CAA) released on Monday, The Beijing News reported. Yu Hongchen, director of the Athletics Administrative Center under the General Administration of Sport of China, said at a press conference in Xiamen, East China's Fujian Province that more than 5.8 million people had attended marathons in China last year. This is higher than 5 million for 1,102 races in 2017.China tops all countries that have International Association of Athletics Federation (IAAF) label races, with 17, including the Shanghai and Beijing marathons, which accounts for 13.3 percent of all IAAF label races in the world. The total amount of sales related to marathons in 2018 reached 28.8 billion yuan in China. The Chinese marathon industry generated 74.6 billion in the same year, higher than 70 billion yuan in 2017, according to The Beijing News. According to the Xinhua News Agency, the Chinese marathon industry boom started in 2015 when CAA canceled the compulsory registration of marathons and sporting event organizers, which led to the influx of marketing companies. In 2010, only 13 marathon races were registered with the CAA.Tao Shaoming, former coach of the national women's marathon team, told the Global Times on Monday that the rapid growth of China's marathons is the result of the economic development and the opening-up policy. It's also consistent with China's go-out policy. Local governments can benefit by organizing marathons to attract tourists and promote sports."The booming marathon industry in China is not overheating. The US has more marathon participants than China in a year. What we need to do now is to popularize marathons to an even greater scale, and create an environment of sports for all," said Tao.