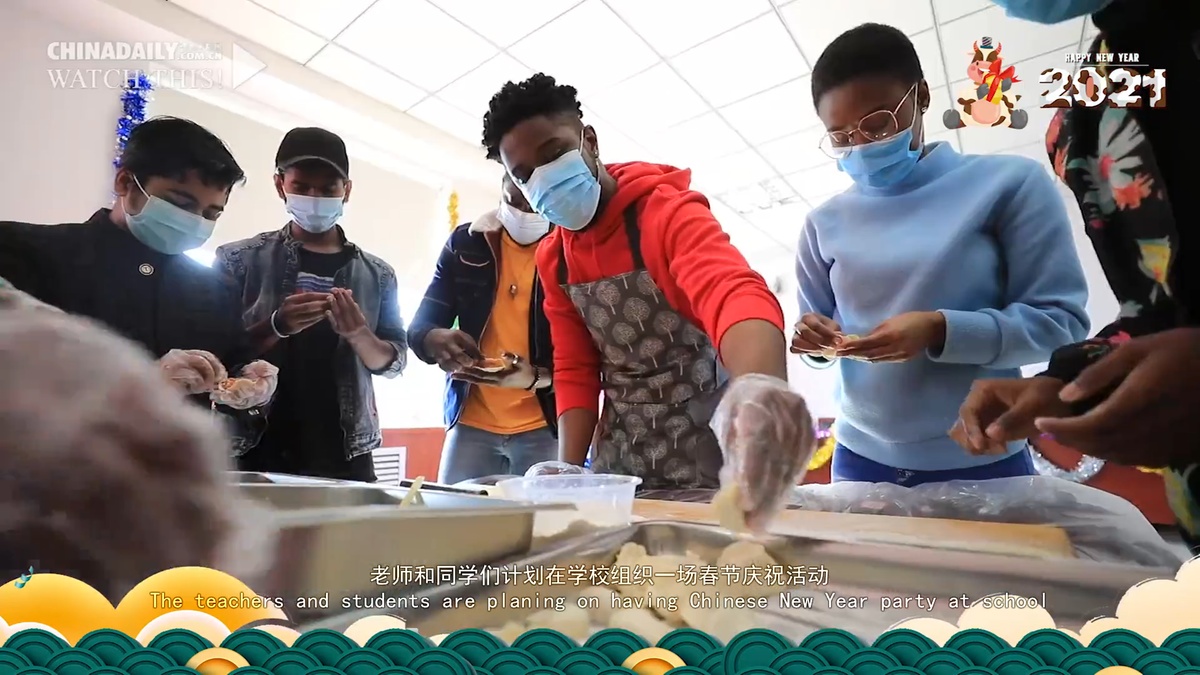 Siakalima, a 19-year-old Zambian sophomore at Hebei University of Science and Technology in Shijiazhuang, makes dumplings with his schoolmates. (Photo: China Daily)

Overseas students in China have spent some quality time during Spring Festival, experiencing typical Chinese celebrations with teachers and classmates eager to make those away from their families feel at home.

Holding a calligraphy brush in his right hand, Mutakala Siakalima learned to write the Chinese character fu, which means good fortune, on a square of red paper by imitating a teacher's movements stroke by stroke.

Siakalima, a 19-year-old Zambian sophomore at Hebei University of Science and Technology in Shijiazhuang, Hebei province, experienced his first Spring Festival in China this year.

After finishing writing, he pasted his fu on the door of his dormitory. "Although it's not as beautiful as my teacher's, it bears all my wishes for the new year," he said.

Jordan Mandujano, from Texas in the United States, has also immersed himself in the festive atmosphere this year. A student at Fudan University in Shanghai, he said he had not experienced it last year due to the tough times caused by COVID-19.

This year's Spring Festival has also been an unusual one for many people in China because they have been advised to stay put instead of returning to their hometowns to reduce the risk of novel coronavirus infections during travel.

The Ministry of Commerce said on Feb 10 that compared with last year, about 48 million more people in 36 major cities had canceled trips back home and chosen to spend the Spring Festival holiday where they work or study.

For many foreign students, the celebrations have provided more opportunities to interact with their Chinese friends.

"I gathered with friends and classmates for a nice dinner, and learned about the holiday customs," Mandujano said. The 26-year-old is pursuing a master's degree in ancient Chinese philosophy and culture.

He also roamed the city taking photographs of people's daily lives, which is one of his favorite hobbies.

"I know about the custom of giving out hongbao with cash inside during the festival," Morgan said as he picked up a pack of hongbao with his favorite design at a supermarket.

He had a full schedule for Spring Festival: taking boxing classes, going to the university library and taking online Chinese courses.

After 14 years in China, Mohamed Noureldin from Egypt has grown more familiar with festival customs.

Now part of a visiting scholar program at the University of Science and Technology of China in Hefei, Anhui province, he said that at first he used to return to Egypt during the Spring Festival holiday "because we don't celebrate the festival".

But about six years ago, he decided to stay for the event. "I found it's a very big celebration and a good chance to learn more about Chinese culture and people," he said.

Like a Chinese person, he now starts to prepare for the festival a week beforehand, visiting friends and preparing for celebratory routines like buying ornaments.

He said he felt a little homesick this holiday, with Spring Festival considered the most important time for family reunions.

"But my parents told me not to go home because the COVID-19 situation back there is not so safe as China," he said. "I have many wishes for the new year, but most importantly, I hope everyone will be safe from the virus."

Maulen Mears, a 24-year-old from Kazakhstan who has been living in Xi'an, Shaanxi province, for a year and a half, said he planned to spend most of his time in his apartment, cooking and learning Chinese.

"I sometimes write some of my own thoughts in Chinese and hand them over to my Chinese friends for review," Mears said. "Their feedback gives me confidence."