CULTURE Pacquiao has plenty to say while he prepares for Thurman

Pacquiao has plenty to say while he prepares for Thurman 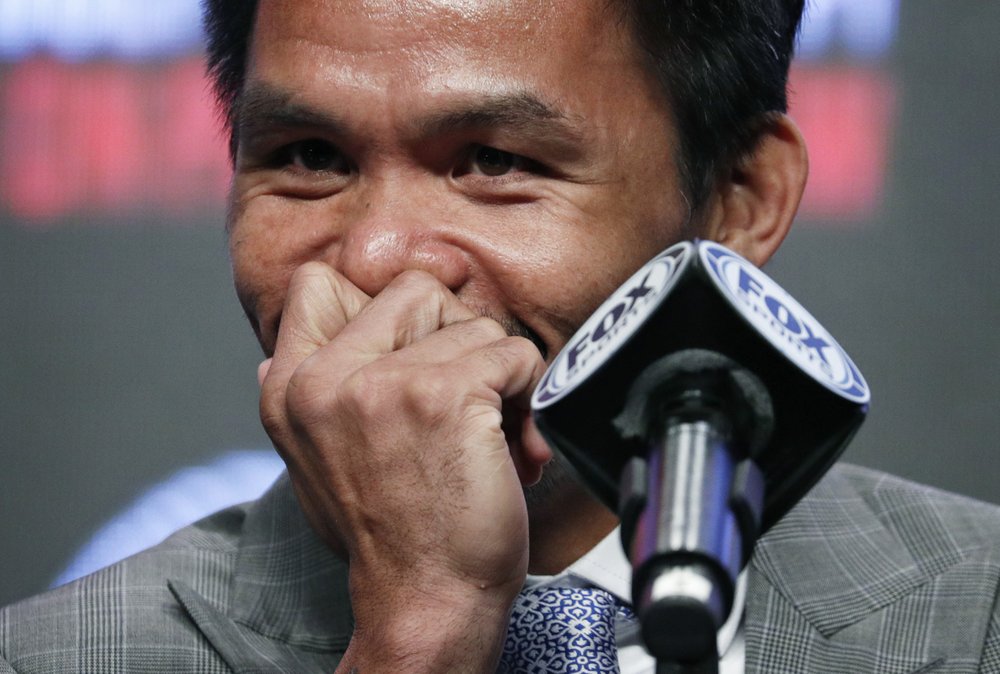 Manny Pacquiao has had a whole lot more to say about boxing ever since he became a politician.

The 40-year-old Filipino senator who once understandably shied away from lengthy conversations in English is more comfortable in the language. A fighter who once kept most conversations short and mild has become much more willing to opine about his sport, his political leanings and his place in both worlds.

Before a recent workout at the Wild Card Gym, Pacquiao boldly predicted a knockout victory when he gets in the ring with unbeaten welterweight champion Keith Thurman on Saturday night in Las Vegas.

The Filipino great has never been a big boaster, and he has only knocked out one of his last 15 opponents over the past decade — a shocking statistic for those who still think of Pacquiao as the world-beating force in his rampaging prime.

He won’t say whether he’s audaciously calling this KO out of true belief or pure promotional chutzpah. But Pacquiao has been speaking his mind more than ever in the late days of a 25-year pro career with no end in sight, and he keeps it up even while facing a fight that could immediately end his recent resurgence.

“I like the fight because it’s a challenge for me, but I know I’m going to win,” Pacquiao said.

Pacquiao’s increased comfort with public speaking also has an ugly, damaging side. He already lost his Nike sponsorship and significant worldwide fan support with virulent anti-gay rhetoric apparently rooted in his newfound evangelical religious beliefs, and he has backed draconian policies in other areas of Filipino life and jurisprudence.

But Pacquiao insists he isn’t thinking much about his political life while he trains in California, even if his stances already overshadow his abilities among a huge segment of the public. He speaks only about his fight with Thurman, the gifted welterweight determined to end Pacquiao’s storied career.

But whether he’s in Hollywood or Manila, Pacquiao’s talk is a fascinating window on his apparent determination to keep going until someone stops him — both in boxing and in politics, where he is widely thought to be a possible successor to President Rodrigo Duterte.

“Just focus on discipline and work hard,” Pacquiao said when asked the secret of his longevity in the ring. “Don’t think about anything else but the training. Boxing is all about focusing and working hard. Nothing else. If you’re thinking about anything except preparation and training and your workout, you’ll forget about boxing. Boxing is about how you punish yourself.”

This is from a man who lives every day of his life in crowded chaos in both the Philippines and Hollywood, his longtime training home. Pacquiao wakes up each day in a house filled with friends and employees, and he does his daily workouts with dozens of people surrounding him and trainer Freddie Roach. He spends his LA nights eating barbecue, watching basketball and basking in the immutable companionship of his enormous entourage.

Yet Pacquiao has bridged all sorts of apparent contradictions and overcome all manner of normally unsurpassable obstacles during a quarter-century in the professional ring.

A teenager who needed rocks in his pockets to make the 105-pound minimum weight for his professional debut in 1995 somehow grew up to become the only eight-division champion in boxing history. A 5-foot-6 slugger with an unremarkable frame tore through divisions stacked with larger champions, including Oscar De La Hoya, the bulky Miguel Cotto and even the 154-pound, 5-foot-11 Antonio Margarito.

Although his political duties consume most of his time outside training camp these days, Pacquiao has revived a career that seemed stalled two years ago with back-to-back victories over Lucas Matthysse and Adrien Broner. He is even a slight betting favorite against Thurman on Saturday despite his opponent’s comparative youth and unblemished record.

When Pacquiao arrived in Las Vegas this week for his final preparations, he had changed his mind about a knockout win. Instead, he only declared himself “focused and motivated,” saying he will “do my best to make the fans happy.”

The politician couldn’t resist one last equivocation, followed by one more insight into his reasons for fighting on.

“Boxing is my passion,” Pacquiao said. “I love to play basketball, but you are (on) a team. You don’t know which people are shooting, you or your teammates. Boxing is you alone. When people are cheering for you, it is for you.”