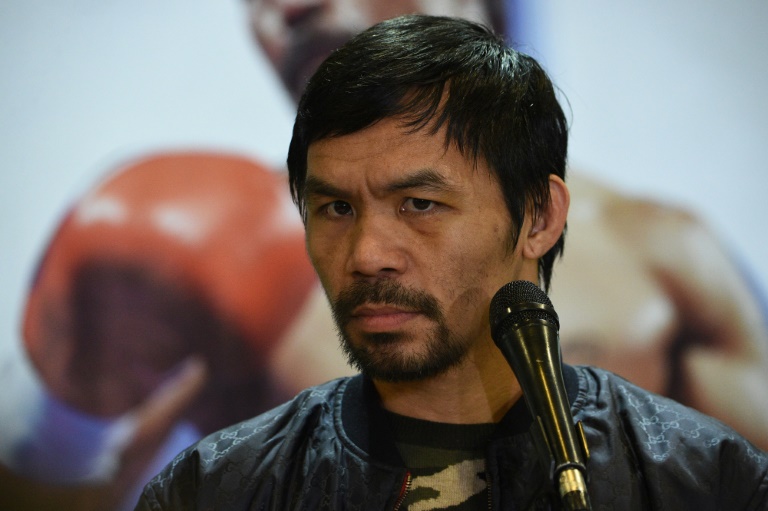 Philippines boxing icon Manny Pacquiao has told his son to forget about a career in the ring. (Photo: AFP)

Philippine boxing legend Manny Pacquiao said Wednesday he has urged his eldest son to stay out of the ring after the 19-year-old's forays into fighting made the young man's mother cry.

Pacquiao, the only fighter to win world titles in eight different weight divisions, said he and his wife have even made a point not to have gloves and equipment at home.

The boxer, known for his rags-to-riches climb from the street, has tried to push his son Emmanuel Jr, who is known Jimuel, to choose another path.

"It pains me that he is boxing because I know how hard it is. I told him, 'Daddy only went into boxing because of poverty... You, you don't need to box'," Pacquiao said on broadcaster ABS-CBN.

"But he said: 'Daddy, like you boxing is my passion also. I want to be a representative of this country as an athlete'," Pacquiao added.

Pacquiao made the comments after a video of Jimuel sparring during an exhibition match was posted on Facebook.

"His mommy had cried several times telling him, 'Don't go into boxing, son'," Pacquiao said of his wife, Jinkee, who had also urged the 40-year-old boxer to retire.

"He really wants to do it," he added.

The younger Pacquiao wouldn't be the first son of a high-profile boxer to follow dad's lead. The sons of British boxers Nigel Benn and Chris Eubank, as well as American slugger Joe Frazier became fighters.

The Facebook footage shows the younger Pacquiao sending his opponent to his knees with aggressive moves reminiscent of his father. Jimuel was wearing gloves and gear branded "Pacman", his dad's nickname.

The elder Pacquiao was watching the match through a video call and was seen talking to his son before it started.

An aide for Pacquiao told AFP Jimuel took up boxing only in December, a month before his father easily defeated Adrien Broner in Las Vegas.

As for his own career, Pacquiao said he was still eager for a rematch with Floyd Mayweather but had yet to discuss his next fight with adviser Al Haymon.

Pacquiao in October signed with Haymon's Premier Boxing Champions group after being promoted by Top Rank's Bob Arum for the past 14 years.