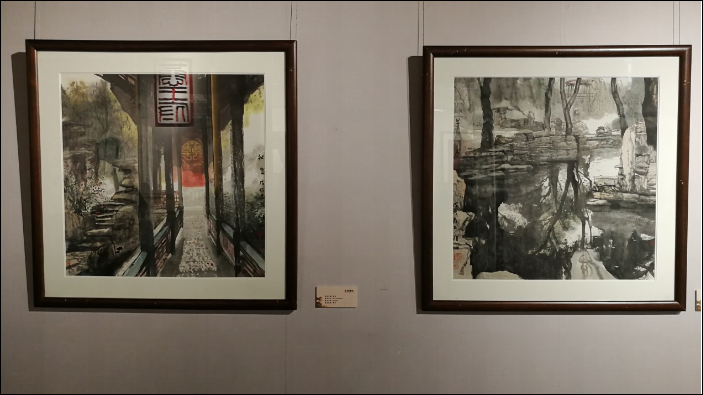 A painting exhibition featuring the artwork of Chinese painter Zou Ming is underway at Beijing's Prince Kung's Mansion, the city's largest and the best preserved Qing Dynasty (1644-1912) mansion. In the last two years, Zou has depicted the sceneries in the mansion, expressing his feelings for the park through his pens and brushes.

The exhibition, titled "Spring and Autumn in Prince Mansion" features dozens of paintings.

Zou combines ink and water-color and says his paintings are not just portrayals of the scenery in the mansion, but also its history.

This is not his first exhibition at the venue. In 2012, he showcased some of his representative works, such as his Chinese ink paintings of southern water towns.

Zou said it was then that the idea to paint from within the mansion came to mind.

"In 2012, when another exhibition of mine was underway in Prince Kung's Mansion, I was impressed by the ancient house – not only the scenery here but also the history behind it," he said. "Then one of my friends suggested I draw some paintings based on the things here. From the beginning of last year, I spent two years drawing in the mansion and created over 70 paintings."

The mansion was originally constructed for Niohuru Heshen, an official highly favored by the Qianlong Emperor. It was later renamed after Prince Kung, a Manchu prince and influential statesman of the late Qing Dynasty, who inhabited the residence in the late 19th century.

Zou's artworks have in some way brought viewers back to the once bustling mansion.

"I came to paint here each season. What fascinated me most are the stories behind the historic official house. Many say the history of the Prince Kung's Mansion can be seen as a historical epitome of the Qing Dynasty. In my paintings, you may sense a kind of silence, because I think in this way viewers can better understand the mansion's history, from its thriving period to decline," said Zou.

The exhibition will run until July 29.