Paintings move from canvas to the big screen - World - Chinadaily.com.cn 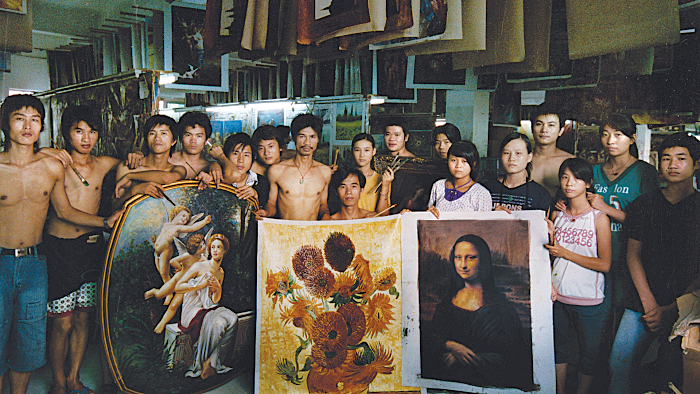 A documentary that reveals the story of Chinese artists in Shenzhen who paint perfect copies of great Western works of art will be shown at the British Film Institute in London on Saturday, in celebration of the Chinese New Year.

Produced and directed by Yu Tianqi along with her father Yu Haibo, the film gives a glimpse into Zhao’s life as a skilled painter of replicas, his obsession with Van Gogh and planning his dream trip to see the real paintings at the Van Gogh Museum in Amsterdam – which is home to one of Zhao’s best clients.

"I found the documentary a fascinating and moving portrait of a craftsman who aspires to be an artist,” said David Somerset, education programmer and curator at BFI Southbank.

“I particularly enjoyed the account of his journey to Europe in which he overcomes disillusionment (meeting the buyer of his prints) to renew and strengthen his passion for the artist Vincent van Gogh but also his own determination to develop as an artist.”

Most of the documentary takes place in Dafen in Shenzhen, China, the country’s largest oil-painting village, where hundreds of self-taught peasant-turned oil painters churn out copies of famous Western art. In 2015, the turnover in painting sales was more than $65 million.

“It was a moving and inspiring film which humanized such enormous endeavor across the world, but especially China. We know about the enormous production of such regions but we rarely get a glimpse of the actual people behind the work,” Somerset said.

Yu Tianqi, who is also a filmmaking lecturer at the University of the West of Scotland, said China’s Van Goghs tells a story of the “challenge and struggle, emblematic of the journey China has taken in recent years”.

The film has also been shown at 15 film festivals across a number of countries.

“Dafen has put itself on the map by creating art work that is almost an exact copy of the renowned masterpieces sold across the world, highlighting the level of skill among its painters,” Yu said.

“My father and I are passionate about showcasing their story and with the help of award wins, and the film being shown at film festivals across the globe, hopefully we can achieve this.”

China’s Van Goghs will be shown at the BFI Southbank on Saturday.