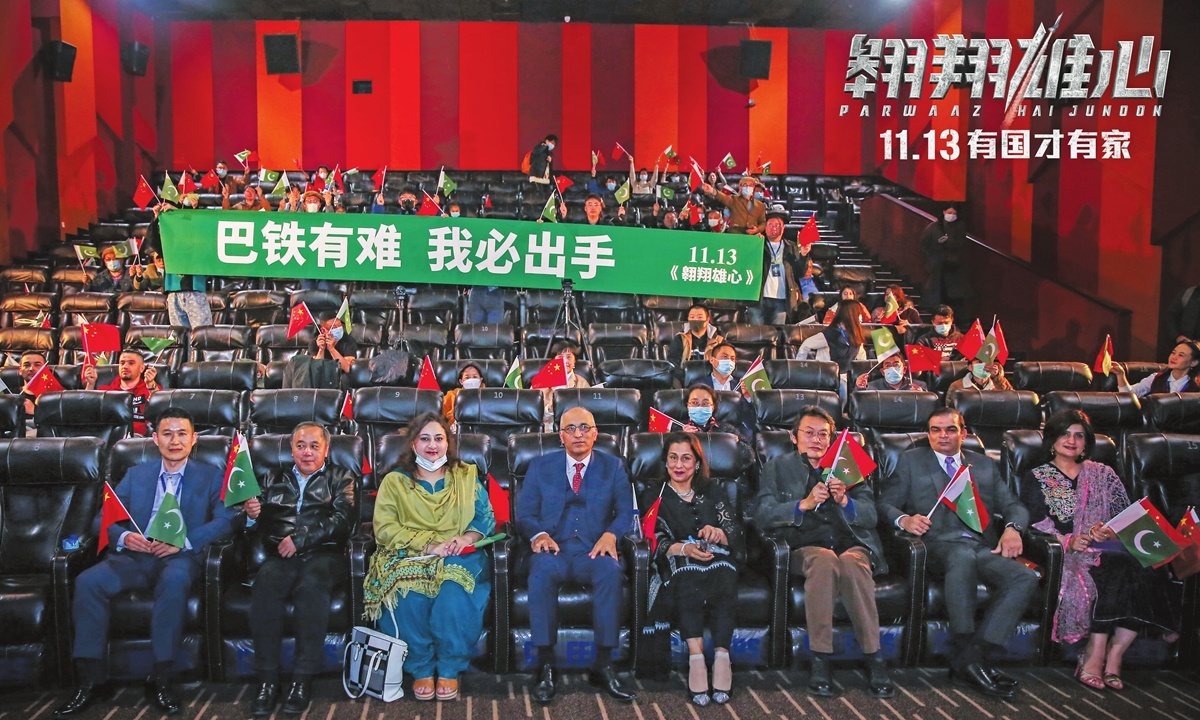 Ahead of the 70th anniversary of the establishment of diplomatic relations between China and Pakistan in 2021, a Pakistani Air Force film held its China premiere in Beijing on Wednesday.

The first Pakistani movie to be released in a Chinese mainland cinema in 45 years, Parwaaz Hai Junoon (lit: Soaring is Passion) is a 2018 Pakistani military action film directed by Haseeb Hassan.

Set for broad release on Friday, the movie tells the story of a group of young patriotic cadets who become the best fighter pilots in Pakistan after overcoming a number of challenges and hardships.

In one of the film's highlights, a JF-17, a fourth-generation fighter jointly developed by China and Pakistan, makes a surprise appearance.

Offiically introduced in 2007, the multi-role combat aircraft is very versatile. In the movie, a student at the Air Force academy notes that the JF-17's maneuverability and reliability gives it a considerable advantage over the French-made Mirage 2000 and is quickly complimented by the teacher.

The movie also focuses on female pilots. One Pakistani woman in the film gives up her US nationality and a life of luxury, and overcomes many difficulties through the power of love to finally achieve her dream to become a JF-17 fighter pilot.

The movie was a rare treat for the audience, as many moviegoers at the screening had never seen a Pakistani film and wanted to learn about the country's movie industry.

Pakistani Ambassador to China Moin ul Haque attended the screening, after which he told the audience that more Pakistani films and TV dramas will be brought to China so that Chinese people may better understand Pakistani culture.

The ambassador added that the film, whose scenes provide a bird's-eye view of Pakistan's natural landscape, is a great way for Chinese audiences to see the beauty of the country.

Xiao Ning, a military expert and film critic who attended the premiere, said he found the film surprising.

Xiao said the JF-17, which only took four years to develop, aroused his interest and is a proof of the two countries' friendship.

Falanxijiaopian, a film critic, praised the film, calling it a patriotic movie whose young actors and actresses will enable it to attract younger audiences.

China and Pakistan's friendship has continued to grow stronger during the COVID-19 pandemic.

At the beginning of the COVID-19 outbreak in China, the Pakistani government collected 300,000 medical masks, 800 hazmat suits and 6,800 pairs of gloves from public hospitals around the nation and transported them to China.

After China's COVID-19 situation improved, the Chinese government and military, and the nation's enterprises and organizations, also lent support to Pakistan, buying and shipping medical supplies including test kits, scanners, and protective clothing to Pakistan and sending teams of medical experts.