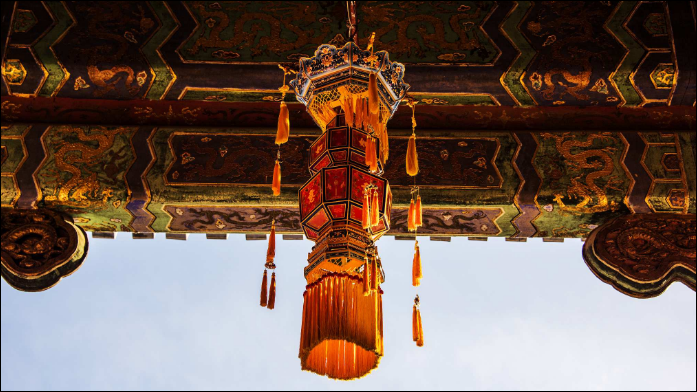 Palace lanterns were hung up Friday along the corridors of Qianqing Palace, also known as the Palace of Heavenly Purity, the largest hall of the inner court of Beijing's Forbidden City.

After disappearing from the former imperial palace complex for nearly 200 years, the palace lanterns, a must-have decoration for the traditional Spring Festival during the Ming and Qing dynasties (1369-1912), finally returned to restore a cultural atmosphere to the palace.

The lanterns will form part of an exhibition which is expected to open on January 6. Dubbed “Celebrating the Spring Festival in the Forbidden City,” the exhibition will showcase nearly 1,000 cultural relics that reflect the ancient decoration of the palaces during the Chinese New Year.

The exhibition will contain two sections, including the display of cultural relics, as well as real scenes. They will be categorized under six main themes – a praying ceremony, worships of the ancestors, greetings with family and relatives, emperor's ruling philosophy, imperial entertainment and celebrations.

Through such an exhibition, visitors could have a detailed idea of how the royal members celebrated the Spring Festival during the Qing Dynasty (1636-1912).

The palace lanterns are part of the real-scene exhibition, which will illuminate all the areas of the Forbidden City that are open to the public.

According to Shan Jixiang, the curator of the Palace Museum, more than 1,000 lanterns duplicating the ancient imperial styles will be made and decorated along the corridors of the palaces.

In Chinese history, the tradition of making and hanging lanterns in the palaces was started during the Eastern Han Dynasty (25-220) and had become fashionable during the Tang Dynasty (618-907).

The structure of the palace lantern was made of bamboo strips and was covered with either silk or gauze. There were paintings or embroidery on the outside, making the lanterns look luxurious and exquisite.

During the Qing Dynasty, the palace lanterns were considered precious gifts, which were usually bestowed to the chancellors as New Year's gifts by the emperors. The patterns of the lanterns during that time become more diversified. Many of them were made into auspicious shapes as a wish for good luck.

The tradition of hanging lanterns during the Spring Festival was canceled in 1840 by Emperor Daoguang for thrift reasons.

Shan said the duplicated lanterns were based on the rich resources stored in the palace museums and researchers have gone through piles of archives left from the Qing Dynasty to find out the details about the craftsmanship as well as the materials.

Animations, videos, music and infrared inductors will also be applied in the exhibitions. There will also be interactive activities, such as settings for photography, allowing the visitors to emerge themselves in the environment, to have a taste of historical “imperial Spring Festivals” in history.