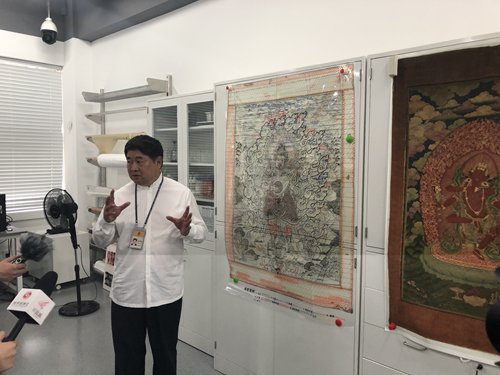 As China observed its annual Cultural Heritage Day on Saturday, museums and galleries across the nation celebrated by holding numerous interesting events to bring in hordes of visitors. As one of the most prominent museums in China, the Palace Museum in Beijing also held a series of activities, the most interesting of which was the opening of its Relic Hospital. 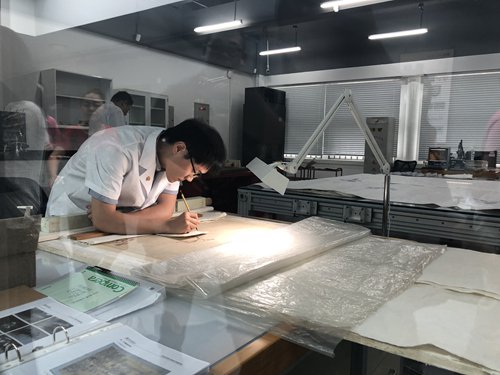 An expert at the Palace Museum's Relic Hospital restores a painting.

A new section of the museum, the Relic Hospital gives visitors a behind-the-scenes look at how the museum's experts restore and repair ancient relics.

As a key feature of this section of the museum, volunteer tour guides are on hand to introduce the restoration process and to answer questions.

"It's said that being a volunteer at the Palace Museum is more difficult than getting into a key national university," Shan Jixiang, the director of the Palace Museum, said at the opening ceremony of the Relic Hospital.

After the opening ceremony, the volunteers began working.

Stepping into the Relic Hospital, visitors could watch experts working on relics in restoration rooms through transparent glass and in some rooms get a close up look at the equipment used in restoration.

"Can anyone guess how this huge machine was moved in?" One of the guides said as a group of visitors entered a room in which a large scanning machine sat next to a doorway that was far too small for it to have gone through.

"They built the room around the machine?" "It was assembled in the room part by part?" The tour group began brainstorming.

"Not exactly," Zhang Xuejing, one of the volunteers, told the Global Times, "The machine was moved in from the other side of the room where the back door is large enough for this big thing."

"It is like going to the hospital, you need to get a CT scan to discover where you are having a problem," Zhang said, noting that the machine is actually more advanced than a CT scanner as it is capable of 3d scanning. "Experts have a better chance of restoring an object when they have an accurate understanding of its condition."

Going through the hall, different types of relics could be seen in separate rooms. One in particular was a large vase-like glass fish bowl with little figures and plants painted on the surface.

"You can see how brilliant the ancient Chinese were as they turned the tank into a mini landscape painting with their decorations. When fish were put inside, they looked like they were flying through the landscape," Yao Na, another volunteer told the Global Times.

"This is what we call scientific restoration."