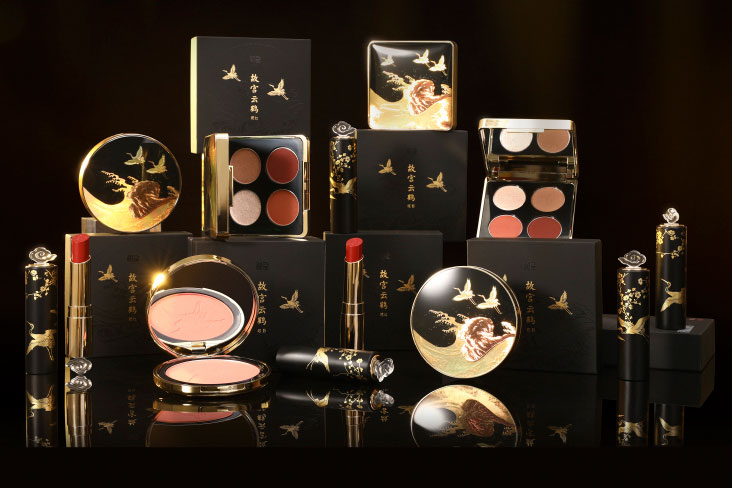 A set of crane-themed cosmetics produced by the Palace Museum was sold on Taobao. (Photo/China Daily)

The museum's Taobao store said on its micro blog that feedback showed the lipstick was not smooth enough, and the color could be improved. The eye shadow's particles were insufficiently fine, and the light blue rouge was impractical.

The store said it will continue to work on the products and roll out better ones.

But the post added that the production interruption won't affect presales, and deliveries will be made after the Chinese New Year, which falls on Feb 5 this year.

The store, called Palace Museum Cultural Creativity, has offered to exchange faulty lipstick with undamaged stock, with any surplus to be sold online.

The store said the patterns on the cosmetic cases were inspired by furniture, paintings and other cultural relics housed at the museum.

One micro-blogger, who claimed to have examined the lipstick set at a physical store, said he would describe the products as tourist souvenirs rather than real cosmetics because the quality was quite unsatisfactory.

Another micro-blogger suggested that the museum consider rolling out products in cooperation with major brands, which would help ensure the products' quality.

The museum indicated its intention to step into cosmetics in April 2017.

In an article posted on its social media platform, the museum mentioned the idea of integrating elements of its collections into cosmetics, including eye shadow and rouge.

The museum first rolled out a set of lipstick with six colors and two masks on Dec 9, just ahead of the "double twelve" online shopping festival on Dec 12. Each tube of the lipstick sold for 199 yuan.

Two days later the museum's Taobao store released a much cheaper version. But some reviewers said the Taobao version was of low quality.

Products sold by the museum used to be pricy, high-end cultural items, but it has changed over the last few years and has been increasingly applying the elements from cultural relics to articles for daily use, such as aprons and pens.

Housing 1.86 million cultural relics, the Palace Museum, also known as the Forbidden City, was China's imperial palace from 1420 to 1911.