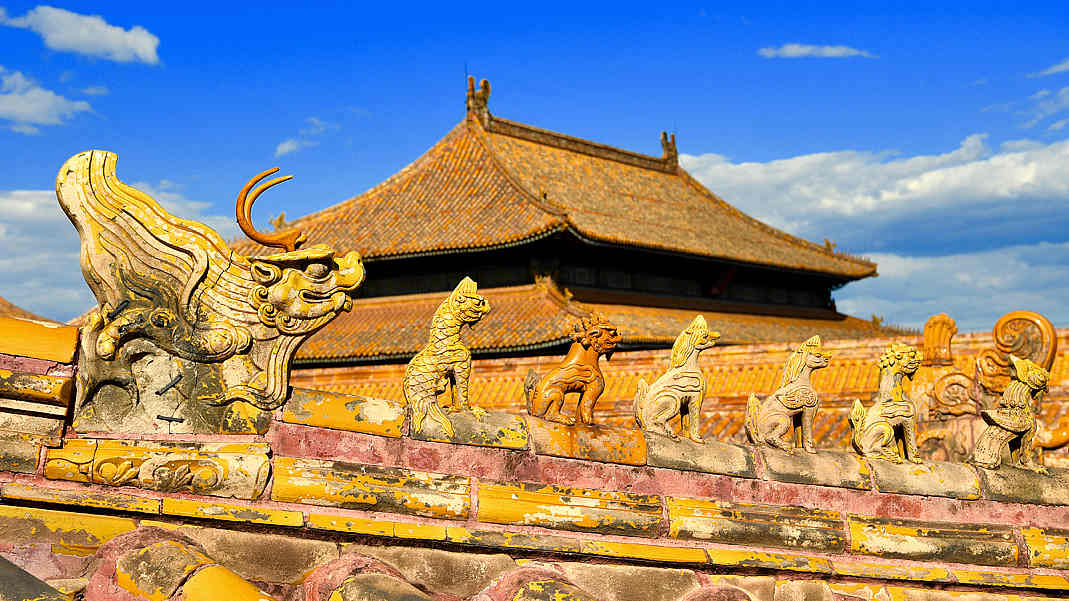 The two-year renovation project of the Hall of Mental Cultivation, or Yangxin Dian, in the Forbidden City officially started on Monday, featuring comprehensive research on its protection and maintenance launched at the same time.

The treasure box was then handed over to Xu Chaoying, a research fellow of the ancient architecture department of the museum, marking the official start of renovation work at the former residence and office of eight Qing Dynasty (1644-1911) emperors.

Built in 1537, the Hall of Mental Cultivation was reconstructed during the Emperor Yongzheng's reign (1723-1735), and after that, the chamber was moved to its rear halls. The front halls then became the offices where the emperor handled routine state affairs, reviewed memoranda and received his officials.

The treasure box in the Hall of Mental Cultivation, made of tin and oblate in a square shape, was the first painted treasure box discovered in the Forbidden City.

Colorfully painted patterns of the azure dragon can be clearly seen on the surface of the box, with the inscription of the "the sixth year of Emperor Jiaqing's reign (1801)."

The main architectural structures in the Forbidden City all have treasure boxes, which were placed in the ridge cylinder in the center of the main ridge on the roof as an item for suppressing evil. During ancient times, placement of the treasure box featured a grand ceremony to pray for safety.

About 30 treasure boxes have been found in various halls and palaces such as the Hall of Supreme Harmony (Taihe Dian), Palace of Gathered Elegance (Chuxiu Gong) and Palace of Earthly Honor (Yikun Gong).

The treasure box was usually made of copper, tin or wood, and contained many things inside, including scriptures, coins, shoe-shaped ingots in five materials of gold, silver, copper, iron, and tin, gems in five colors, satins in five colors, silk threads in five colors, five spices, five medicines and five cereals.

The renovation covers 7,707 square meters, and the building area is around 2,540 square meters. A total of 13 historic buildings and their affiliated glass doors and wooden screen walls will be repaired.

According to the museum, the maintenance work aims to retain the historical information contained by the ancient buildings to the greatest extent and not to change the original look of the relics.

"I hope the renovation of the Yangxin Dian will be a perfect conclusion of the whole of maintenance and protection project, which has lasted a total of 18 years and involves almost all of the ancient buildings in the Palace Museum," Shan said, adding that "it will be a nice start to the preservation work of the Forbidden City after its 600th anniversary."

The maintenance project is scheduled to finish in 2020 when the Forbidden City celebrates its 600th anniversary.