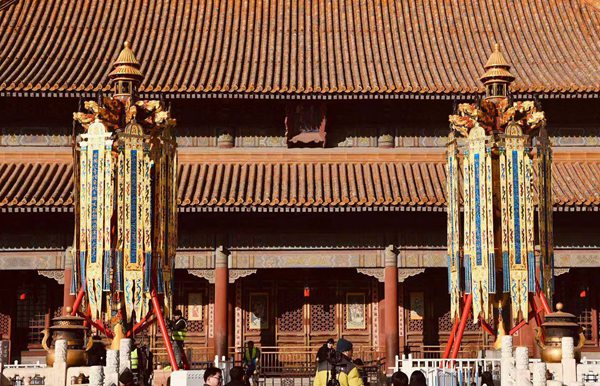 BEIJING, March 24 (Xinhua) -- A pair of Heavenly Lanterns and Longevity Lanterns each, the biggest creative products ever designed by the Palace Museum, will be put up for auction in early April, the museum's curator said Sunday.

Curator Shan Jixiang made the announcement in a speech at the 2019 Tencent Neo-Culture Creativity Conference held here, saying all the gains from the auction will be donated to help people in China's poverty-stricken regions.

Noting the importance of poverty reduction in China's progress toward a moderately prosperous society in all respects, Shan said the museum, also known as the Forbidden City, with its cultural and creative ideas, should be capable of contributing to the battle against poverty.

During a special exhibition for Spring Festival, the visiting areas of the Forbidden City are transformed into a Spring Festival cultural experience, with heavenly lanterns (tiandeng) and longevity lanterns (wanshou deng) at the Palace of Heavenly Purity and the Hall of Imperial Supremacy.

The lanterns, all historically accurate reconstructions based on archives from the Qing dynasty, were installed and lit up for the first time in almost two centuries. In Qing dynasty, the installation and dismantling of these Spring Festival lanterns required the work of over 8,000 personnel, according to the museum.

Shan focused on the exploration of digital culture and creativity at the Palace Museum in his Sunday speech, vowing to further improve its digital platform and make a visit to the museum an easier, more efficient and more happy experience for the people.

Among the key speakers at the 2019 Tencent Neo-Culture Creativity Conference are writer Mai Jia, who talked about how writers can tell stories about Chinese people to the world well, and Tencent Pictures CEO Cheng Wu, who said the evolvement in cultural production modes is leading to China's higher ability to tell its own story.