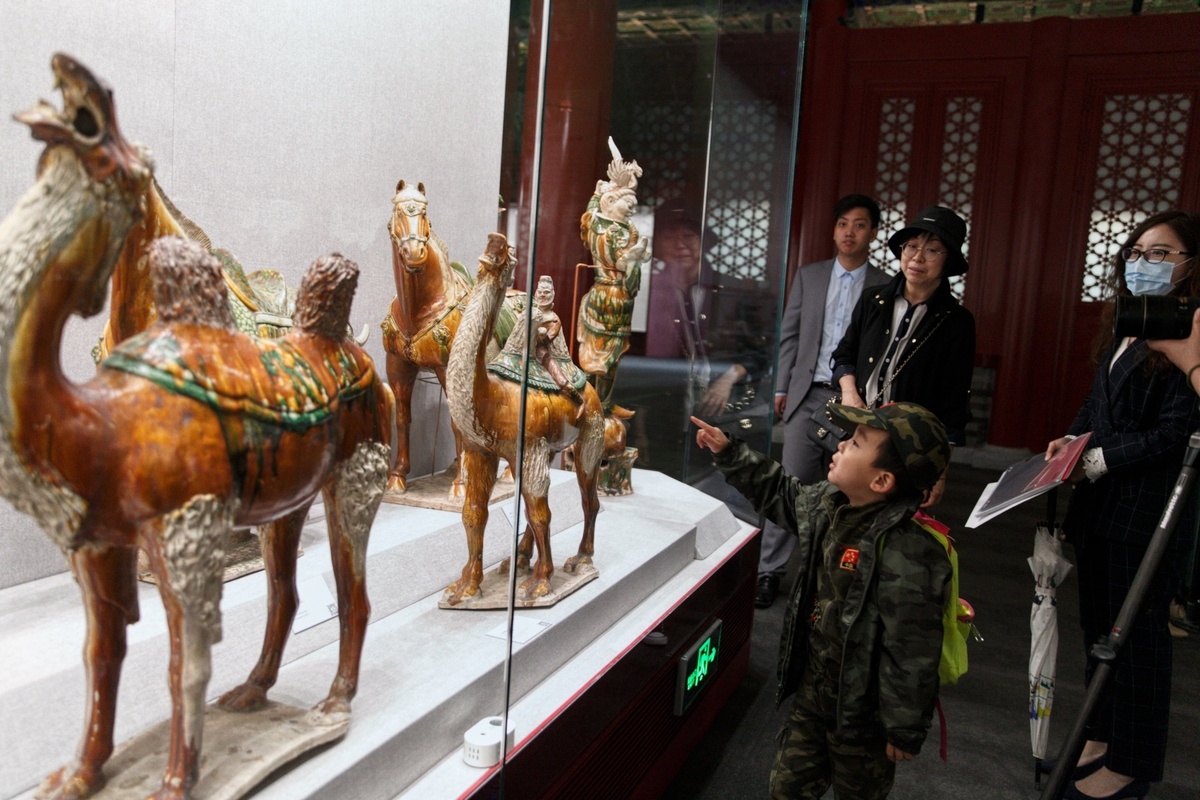 Visitors admire exhibits during a preview of the Palace Museum's new ceramics gallery in Beijing on Friday. The gallery is to officially open to the public on Saturday. (Photo: China Daily)

After about two years' preparation, the Palace Museum's new ceramics gallery is to open to the public in Beijing on Saturday.

The new gallery, in the Hall of Martial Valor (Wuying Dian), on the west side of the museum, is displaying over 1,000 highlighted Chinese ceramics ranging from 8,000 years ago to the early 20th century.

"In recent years, ceramics researchers at the Palace Museum have made lots of academic discoveries through studies of such an abundant collection," Wang Xudong, director of the museum, said at the opening ceremony of the gallery on Friday.

"Through comparative studies with new archaeological discoveries and methods of new technologies, many questions have been resolved," he said. "And it's a good chance to better display these achievements to the public, and thus honor the excellence of Chinese ceramics culture."

Lyu Chenglong, chief curator of the exhibition at the gallery, said that after the fall of the Qing Dynasty and the outer section of the Forbidden City was opened as a museum, the first exhibition hall displaying ceramics was in Wuying Dian in 1914.

"To some extent, the Forbidden City's ceramics gallery has returned to Wuying Dian," said Lyu, who is also the director of the museum's department of objects and decorative arts.

The Palace Museum had its first ceramics gallery in 1952, but it was moved around the palace compound in the later decades. The Hall of Literary Brilliance (Wenhua Dian) was the last ceramics gallery from 2008 to 2017, and exhibited about 400 artifacts.

"The ceramics collections at the Palace Museum are not only huge, but also include wide ranges of varieties, and many of them are clearly dated," Lyu said. "That enables us to design an exhibition in chronological order to unveil a continuous development of the artifacts."

Among the major treasures are artifacts produced by the top five porcelain kilns of the Song Dynasty (960-1279), often referred to as the zenith of ancient Chinese aesthetics.

The products of the imperial kiln of Ming and Qing dynasties, which stood in Jingdezhen, Jiangxi province, and exclusively served the royals, is another landmark in the exhibition. Some of these artifacts are displayed based on their functions, such as ceramics for weddings, dining tables, sacrifice rituals and religious ceremonies.

"Chinese ceramics widely spread to the rest of the world and nurtured local styles of porcelains," Lyu said. "But they also absorbed cultural elements from overseas as key witnesses of cross-cultural communication."

To bring more of the highlighted artifacts from the museum's warehouse to the public's view, a miniature exhibition "hall" is designed within the gallery, and some important but rarely exhibited pieces will take turns being displayed there. The first group of porcelains chosen for this hall include several exquisite openwork vases with revolving interiors made during reign of Qianlong (1736-95), an emperor known as a collector and an artwork enthusiast.

Although background information is presented in the gallery explaining the researchers findings on ceramics in everyday language, Lyu's team put a QR code on each label in the exhibits. By scanning these, visitors can get more elaborate information of the artifact on their phones.