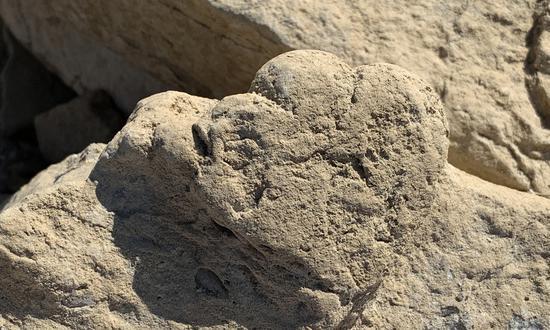 The fossil track, which is only 5.7 cm long compared to average footprint lengths in the range of 30 to 50 cm, is suspected to belong to a juvenile stegosaurus who lived during the Early Cretaceous in Orku District, Northwest China's Xinjiang Uygur Autonomous Region, according to a research report published in the Palaios scientific journal on March 3.

"The baby footprint discovered this time can help us restore the size of a young stegosaurus, and know more about the development process of the stegosaurus," a researcher and contributor to the report surnamed Wang, told the Global Times on Sunday.

It also plays an important role in understanding the diversity of the Early Cretaceous dinosaur fauna in Xinjiang and the environmental information at the time, said Liu Chang, a correspondent from the China University of Geosciences.

A great number of stegosaurus tracks have been found around the area before; however a track of such a small size is very rare, said the experts.

Paleontologists speculate that juveniles might live hiding in nests or relatively safe areas until they grew to be close to adult size, said Liu.

"A combination of the small and large stegosaurus footprints may somehow show the behavior to nurture their offspring," noted Wang, adding that "before we have never found a baby fossil of stegosaurus, and we didn't know the size of a stegosaurus when they were young."

"Although we're not able to scientifically confirm the specific stegosaur genre of this fossil footprint yet, with the tracks of wuerhosaurus that were once found in this area, it is greatly possible that this baby stegosaurus might turn out to be a wuerhosaurus as well," Wang told the Global Times.

Experts also have found in this area a large number of tracks of carnivorous dinosaurs , stegosaurus, pterosaurs and tortoises since 2009, indicating that this place was once a land of abundant plants with many animal activities in the Early Cretaceous.