CULTURE Paleontologists set out to find source of dinosaur in Tibet

Paleontologists set out to find source of dinosaur in Tibet 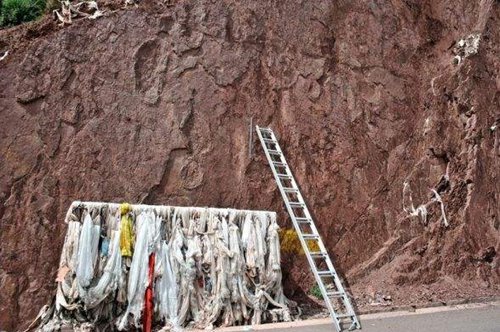 Paleontologists on Monday kicked off an expedition to try to discover which dinosaur had left mysterious footprints found in Southwest China's Tibet Autonomous Region.

Xing Lida, a dinosaur footprint expert at the China University of Geosciences in Beijing, along with his research team arrived at Qamdo, Tibet on Monday, to study the recently discovered dinosaur footprints, Xing told the Global Times on Monday.

Xing said members of the Chinese Academy of Sciences (CAS) found the footprints last year. His expedition is being undertaken in cooperation with the CAS. Xing declined to reveal additional details.

After evaluating tips they've received, Xing and his team set off by foot on an expected two-week trek.

The renowned "Big Footprint" found on a cliff in Qamdo has attracted thousands of tourists.

At least eight pairs of huge footprints were discovered in 1999 when workers used explosives to build a local road. The largest footprint is 1.7 meters long.

Local people call it the footprint left by a god.

After visiting the "Big Footprint," Xing said it was likely left by a brontosaurus, which lived during the early to middle Jurassic Period.

The "Big Footprint" was the first time dinosaur footprint found in Tibet, which is significant for the study of the distribution, and palaeoenvironment of dinosaurs in the area, according to the Science and Technology Daily.

Xing also found abundant cracks and ripples near the footprints, suggesting Qamdo geography was very different at the time of dinosaurs.

The footprints were likely made when brontosaurus roamed along a shore of a lake or sea, suggested Xing.