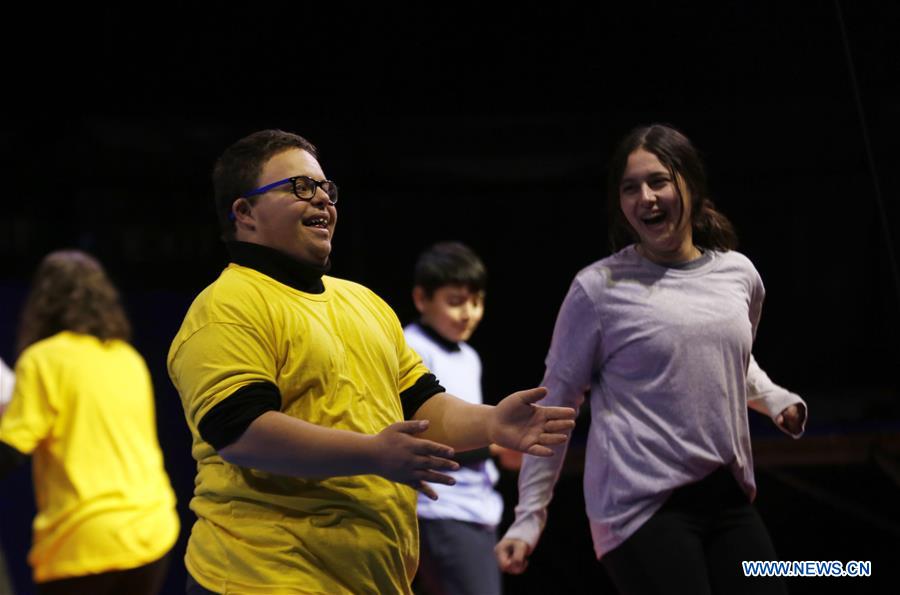 Young students from Palestinian Circus School perform together with peers with intellectual disability in an experimental show in the West Bank city of Ramallah, Feb. 20, 2020. The performance was the first of its kind, which came after almost three months of training and preparations. Ten young performers wearing colorful shirts appeared on the stage, including five with intellectual disability. (Photo: Xinhua)

RAMALLAH/BIRZEIT, Feb. 20 (Xinhua) -- In a unique experimental show, young students from the Palestinian Circus School performed together with peers with intellectual disability, in the town of Birzeit in west of Ramallah city on Thursday evening.

The performance was the first of its kind, which came after almost three months of training and preparations. Ten young performers wearing colorful shirts appeared on the stage, including five with intellectual disability.

Established in 2006, the Palestinian Circus School is the only organization dedicated for contemporary circus in the West Bank.

The school said that it has been working with children and youths with special needs for about five year, and has finally brought their work to stage.

Circus Trainer Nayef Abdallah said that working with this group was the most challenging experience in his 13 years of circus training.

"This is the first try to mix them," said Abdallah, adding that training for the show should guarantee that there is no difference of the youths with intellectual disability on stage while showing team work and cooperation between the performers.

As the lights dimmed and classical music played, the students came to the center of the circus tent, where some carried others, built human pyramids and raised one another over boxes or other colleagues.

"We work with 200 students on annual basis, in disadvantaged and less privileged areas, with different abilities," said Mohammad Rabah, director of the Palestinian Circus School.

"Circus is magical since you have different disciplines and you can choose what is suitable for you and where your talent can be ... It's all about working together, trust and discovering yourself and others," he added.

The circus school has managed to reach a wide target audience of children and their parents or guardians to promote their values and tried to merge performance arts into the educational system, according to Rabah.

"This year, we decided that we should use circus to promote the rights of children with disabilities, which we lack in Palestine ... We thought about bringing these children to show the public, the policy makers and the world that they have the abilities, even with circus," he added.

Marah Natshe, who joined the circus school at the age of 12, said that she found her passion in this form of art and grew up to become a development researcher and artist specialized in social circus.

Natshe told Xinhua that her 13 years of engagement with the circus has given her confidence and hope and taught her to respect diversity and openness.

"The magic of the circus is to bring people from all around Palestine to meet in one place with no judgement from anyone. You can be just yourself and this is where the magic comes and it changes you and your perspective of life," she said.