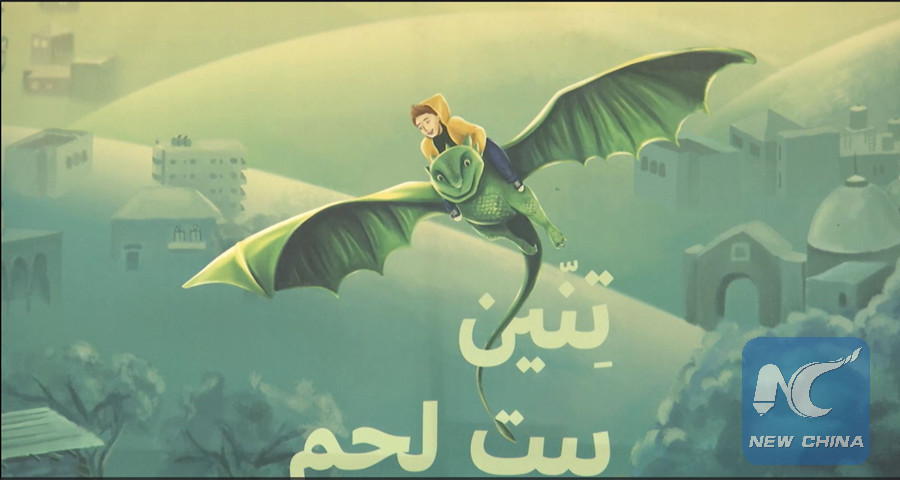 The Palestinian Orchestra performed its first musical storytelling in the threater of Birzeit University in the West Bank this week.Photo: Xinhua

The Palestinian Orchestra performed its first musical storytelling in the threater of Birzeit University in the West Bank this week by putting a local myth expressive of hope and heroism on stage.

The original story, Dragon of Bethlehem, is about a young boy overcoming his harsh reality at a Bethlehem refugee camp with the help of a dragon, which takes him to fly over Bethlehem surrounded by Israel's separation wall and military checkpoints.

For the musical storytelling, it was accomplished to the credit of young Palestinian composer Faraj Suleiman, who created the music, and Fida Zeidan, a talented vocal storyteller who designed the orchestra on the stage.

"Different characters are represented first by instruments and different melodies that the composer has composed for them," he added.

According to Palestinian children literature writer Huda Al-Shawwa, also the author of the original story, the local myth of the dragon is intrinsic to the Palestinians, and the purpose of the story is to help children look beyond their inconvenient reality in a new context.

"It's a fantastical story that tells some of the harsh realities any Palestinian child living in refugee camps as well as in Palestinian towns and villages across Palestine have to face in their everyday life," Shawwa said.

"It's also telling young children and young adults to do small changes within themselves, to face harsh circumstances in their daily lives," she added.

"What small changes can you do in your life, in your school, in your community, within your friends to foster perhaps a greater change?" the Palestinian writer asked.

Afnan Rafiq, a 25-year-old pharmaceutical representative, made a point of driving from Jenin in the north of the West Bank to watch the performance in Birziet.

"In those 30 minutes, what we saw is just the tip of an iceberg that is the potential of Palestinian talents. Imagine what that iceberg would be like once it is unravelled," Rafiq told Xinhua after the show.