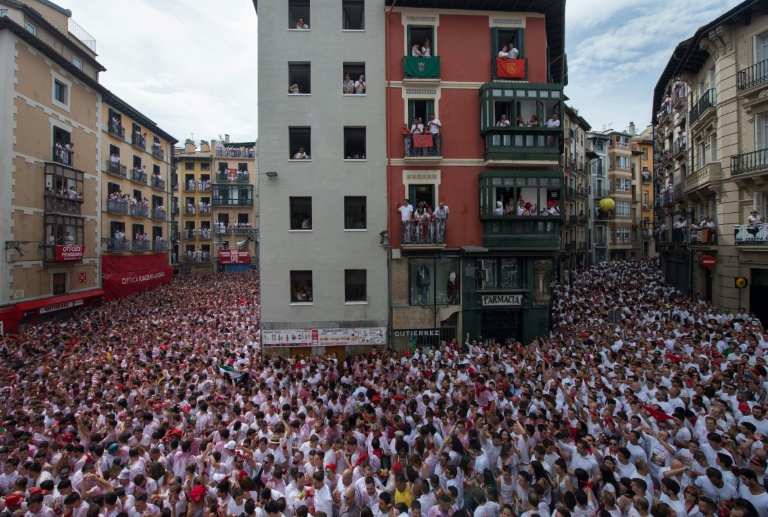 This year, in an attempt to reassure the thousands of  tourists who come to party and take part in the hair-raising runs at Pamplona's famed San Fermin festival, the city in the northern Navarra region has dubbed itself "free of sexist assaults".(Photo: AFP)

Pamplona's famed San Fermin festival begins on Friday, overshadowed by a sexual abuse case that has tarnished one of Spain's best-loved traditions.

This year, in an attempt to reassure the thousands of tourists who come to party and take part in the hair-raising runs, the city in the northern Navarra region has dubbed itself "a city free of sexist assaults".

During the San Fermin festival in 2016, five men who called themselves "The Pack" filmed themselves having sex with an 18-year-old woman.

She said they had gang raped her while they claimed she had consented in a case that sparked a powerful feminist wave of indignation across the country.

An April court decision to sentence them for "sexual abuse" rather than the more serious offence of "sexual assault", a category that includes rape, pushed thousands of Spaniards onto the streets in anger.

Further fanning the flames, the five men were freed on bail just two weeks before the start of the festival, which means they could -- in theory -- return this year.

Incidents of sexual harassment are not new to the festival. In 2013, photos of women being groped by men shocked Spain.

Until then, "there was very backward thinking that justified men assaulting others under the effect of alcohol and in the party context", Laura Berro, in charge of gender equality at Pamplona city hall, told AFP.

Since then, police and the authorities have at least been more alert to the issue, although the 2016 sexual abuse case is an indicator of the scale of the problem.

A phone number is available 24/7 for people to report sexual violence. Police then attempt to identify perpetrators using CCTV footage.

Since 2004, close to 95 percent of complaints for sexual violence during the festival have resulted in the perpetrator being identified, according to a study by Navarra University.

"Over the past two years, there has been a huge rise in complaints. Is that because there are more assaults and abuse? No. It's because they've been reported more," says Paz Frances, who authored the study.

An information stand in a central square has also been set up to raise awareness among women taking part, and also to try to get wind of cases not reported to the police.

Before the start of the festival, hundreds of activists gathered Monday in Pamplona to pay homage to Nagore Laffage, a nurse killed 10 years ago during the bull run by a man after she refused to have sex with him.

"People have been more aware for several years now, because we've given voice to feminist ideas, and gradually, there are very important, very deep changes taking place," Berro added.