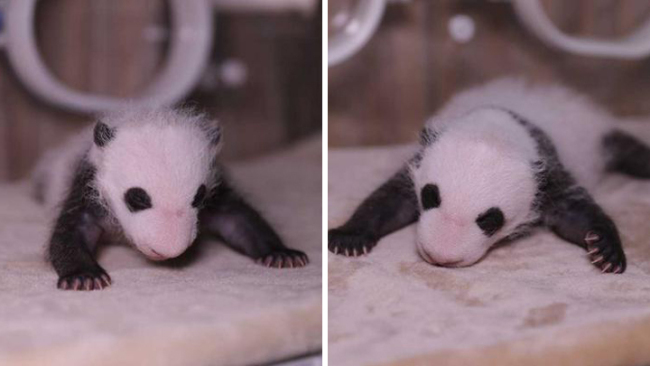 The captive-bred panda twins "Reganmian" and "Danhonggao." (Photo: China Plus)

The world's first pair of captive-bred panda twins born this year were officially named Friday, inspired by two local delicacies in China, according to the Chengdu Research Base of Giant Panda Breeding.

The names of the two cubs were announced in a video at their one-month-old celebration on Friday by the base and the Sichuan medical assistance team previously dispatched to Hubei Province to help treat the COVID-19 patients. Wuhan is the capital city of Hubei and the former epicenter of the COVID-19 outbreak in China.

"'Reganmian' is not only a delicacy but also a reminder of the unforgettable past months. We named a panda after the noodle snack as a tribute to Wuhan and the Wuhan people," said Zhang Kun, a member of the medical team.

The panda cubs were born on March 17. They are both in good health, with the elder brother weighing more than 1 kg and his younger sibling weighing over 800 grams.