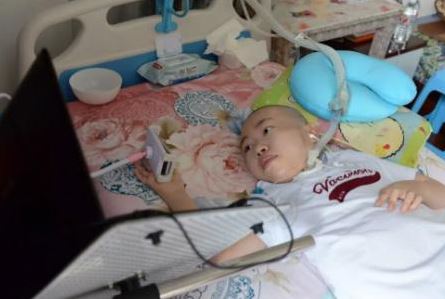 Bao Zhenni, a 16-year-old girl who suffers from spinal muscular atrophy (SMA) which left her only one functioning finger, recently published a collection of poems that were later adapted into a song by Chinese singer Mao Buyi, Thepaper.com reported.

In June, Bao’s first poetry compilation, "Yusheng: Bao Zhenni's Poems and Songs," hit the stands. On July 1st, an event called "I want to be a poet - Bao Zhenni Hangzhou Poetry Sharing Session" was held in Hangzhou. Dozens of young poets and poetry lovers gathered for the occasion.

Bao was born in Wencheng county of Zhejiang’s Wenzhou City in 2001. She started having trouble standing and was later diagnosed with SMA by the time she turned 1-year-old. The doctor informed Bao’s parents the disease will lead to the loss of motor functions in time and the inability to breathe.

"Your child may only live to be four," the doctor said.

Bao’s family went into debt trying to keep up with her treatment. Bao caught pneumonia in 2014 and it almost cost her complete functionality of her lungs. Bao now relies on a ventilator to stay alive. By October 2016, her situation was dire since she was only able to move her right thumb and she only weighed 28 pounds.

For as long as Bao can remember, books were her best friend. Yet her greatest pleasure comes from writing poetry. Her lone moving finger became her link to poetry and life. Through her perseverance, Bao even inspired others.

"I heard about Bao Zhenni in last November,” Poet Mu Bai said. “Although she suffered from her illness this whole time, I don’t see her complains about life in her poetry, I only see the cheerful verse and optimism. I wanted to make a collection of poems for her so that her words can motivate and inspire other people.”

“I want to be a poet who loves life,” Bao said.

“No one but me shall determine my destiny, I meant to die when I was born, but I want to live now," Bao wrote in a poem to herself.

Through all of her trials and tribulations, Bao said she still aims to live a life of hope and meaning.