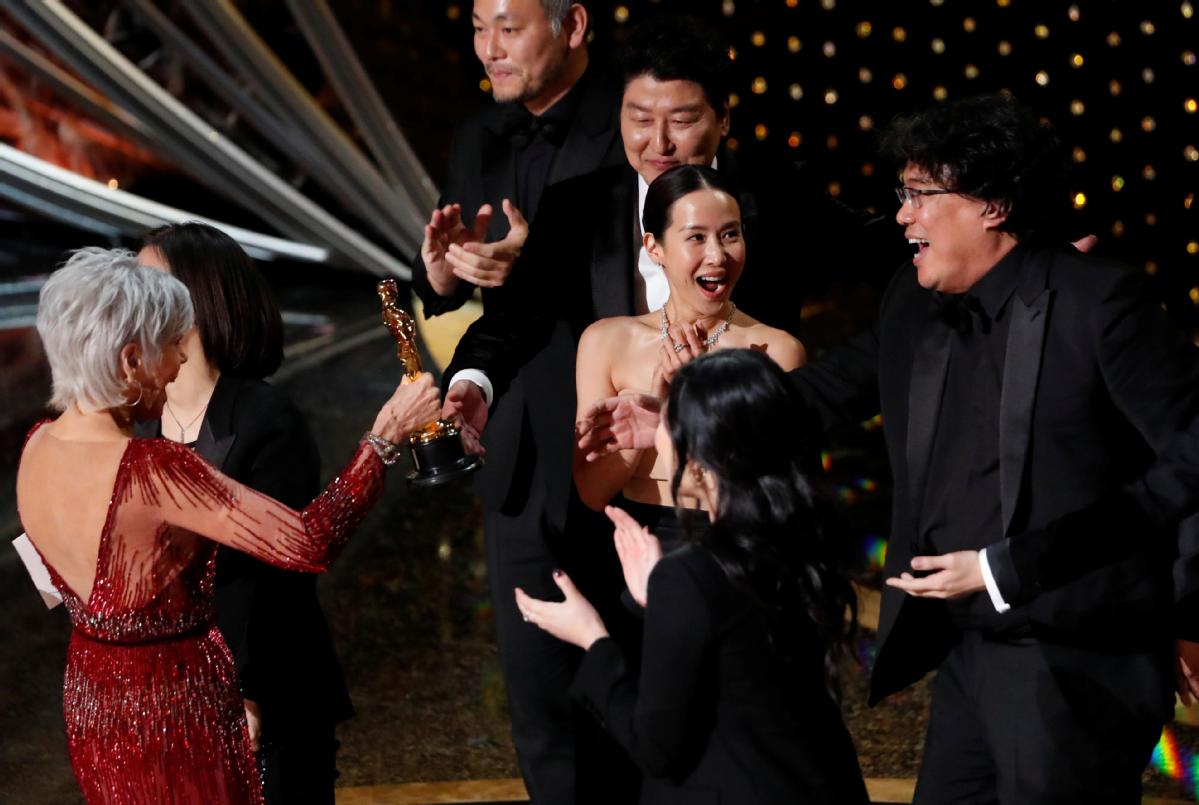 Bong Joon-ho (right) wins the Oscar for Best Picture for Parasite at the 92nd Academy Awards in Hollywood, Los Angeles, in the US on Monday. (Photo: Agencies)

LOS ANGELES - In a milestone win that instantly expanded the Oscars' horizons, Bong Joon-ho's Parasite became the first non-English language film to win best picture in the 92-year history of the Academy Awards.

Parasite crashed through the barrier of subtitles and the longstanding tradition of the Oscars, South Korea's Yonhap News Agency reported.

After winning best foreign language film at this year's Golden Globe Awards, the South Korean director said, "Once you overcome the one-inch-tall barrier of subtitles, you will be introduced to so many more amazing films."

Bong became the second filmmaker to nab the top honor both at Cannes Film Festival and the Oscars for the same film.

South Korean President Moon Jae-in sent a congratulatory message through his social media account, saying: "I am proud of director Bong Joon-ho, the actors and crew. I am especially grateful to them for instilling pride and courage in our people as we come together to weather difficulties."

"Parasite has moved the hearts of people around the world with a most uniquely (South) Korean story … An amusing yet sad movie, Parasite also conveys social messages in a novel, outstanding and successful way," said Moon.

Parasite is an adroitly-written, contemporary film on the weighty subject of class warfare that follows the members of a poor household scheming to become employees of a much wealthier family by posing as unrelated, highly-qualified individuals.

"There's a great deal of political rage worldwide exacerbated by a tangible sense of widening social inequality, and Parasite feeds into this very effectively," Bechervaise said.

The success of Parasite comes despite the global dominance of the English language, a perennial challenge for filmmakers working in other tongues and doubly so in the world's biggest cinema market.

On social media, netizens greeted the Oscars awards. One netizen said, "I'm in tears when I watched. Can there be any better way to make known the (South) Korean culture to the world (than through Parasite)?" Another netizen said South Korea's deeply-rooted social inequality was made known to the world through the film.

Some experts forecast that the success of Parasite may open up opportunities in Hollywood for Bong as well as other South Korean filmmakers, actors and actresses