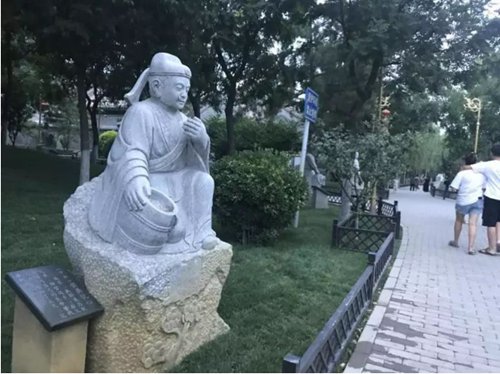 A statue in a Beijing park, which tells the story of a man who tasted his father's feces to work out what illness he was suffering from. (Photo: Sina Weibo)

A Beijing park sparked controversy recently after using statues to tell of ancient filial stories, such as a son tasting his father's feces to judge his illness, and a man who buried his own son alive to save food for his mother. In Xiaoti Park (which means park of filial piety in English), stone statues were placed in the garden, each with a story from an ancient Chinese book that collects 24 filial stories from the past. One statue is of an impoverished man who buried his 3-year-old son alive just to save food for his mother. Another is of man who tasted his father's feces to decide his father's illness. The statues were intended to educate people about filial duty. However, instead of being educational, they scared passersby and netizens alike. Many went online to complain that the ancient stories have little educational value these days. And the stories are more intimidating than inspiring, netizens said.A cleaning lady in the park also said that she has difficulty understanding the stories. "How much could a 3-year-old eat, and exactly how much food can be saved after burying him?"  Xing Guifen, curator of the village museum in Gaobeidian, where the park is located, told the Beijing Youth Daily that the park was completed in August 2011, and the statues are intended to teach people respect for the elderly, not to intimidate people.Chu Zhaohui, a research fellow at the National Institute of Education Sciences, said that advocating filial piety should enhance people's moral judgment and everyone in a specific scenario needs their own view of what filial piety entails.