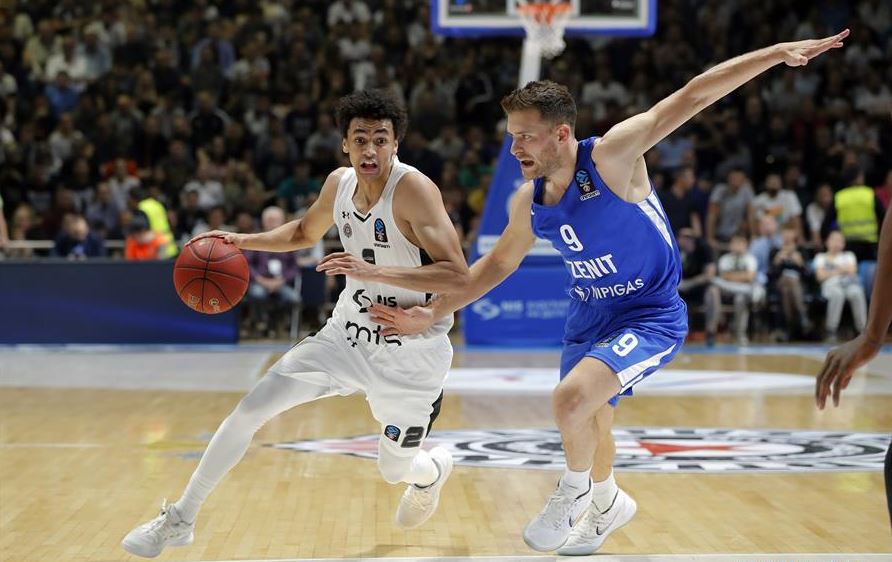 Partizan's Marcus Paige (L) vies with Zenit's Gal Mekel during the second round match at the regular season of 2018-2019 Eurocup basketball tournament between Partizan and Zenit in Belgrade, Serbia on Oct. 9, 2018. Partizan won 89-82. (Photo: Xinhua)

The Group C match took place in front of 6,200 fans here at the Aleksandar Nikolic Hall.

After trailing 10-2 to the visitors at the beginning of the first quarter, Partizan managed to catch up thanks to goals from Jock Landale, Vanja Marinkovic and a slam dunk from Rade Zagorac. However, Jalen Reynolds of Zenit managed to keep his team on top with efficient scoring, while Vladislav Trushkin added a three-pointer to give the Russians a 17-10 lead.

Some tough defense enabled the home team to get back into the match at the end of the first quarter, and almost even up the scores at 21-22.

Although Partizan took the lead at the beginning of the second quarter thanks to a Marinkovic three-pointer, Zenit embarked on a 12-point scoring spree led by Reynolds and Jarrod Uthoff, and managed to build a double-digit lead.

Again, the home team tried to tighten the defense in final minutes of the period to bring the scores level, but Zenit replied with six unanswered points to set a half-time score of 46-39.

Partizan's Landale opened the second half with two three-pointers, and after precise free throws from Bandja Sy and Zagorac, the home team decreased the deficit to just one point (50-51).

With some efficient defense and powerful scoring from three-point range, Zagorac dragged the Serbian team into the lead by the end of the third quarter, which expanded to eight points by the 27th minute to sit at 63-55. Still, with another scoring sequence, Zenit managed to catch up and even the scores up at 65-65 before the final quarter.

The two teams started the fourth quarter in an uncertain manner. Most impressive was a slam-dunk from Uthoff, answered by a three-pointer from Aleksej Nikolic to tie the scores at 78-78 just four minutes before the final whistle.

Thanks to an eight-point sequence from Sy and Djordje Gagic, the home team established a five-point cushion at 83-78 which proved decisive for victory.

Most efficient in the Partizan ranks was Zagorac with 16 points, 6 assists and 5 rebounds, followed by Landale (16 points, 6 rebounds), while for Zenit, Uthoff scored 25 points.

Partizan's next EuroCup game will be in Spain against Valencia on October 17, when Zenit will entertain Trento of Italy.