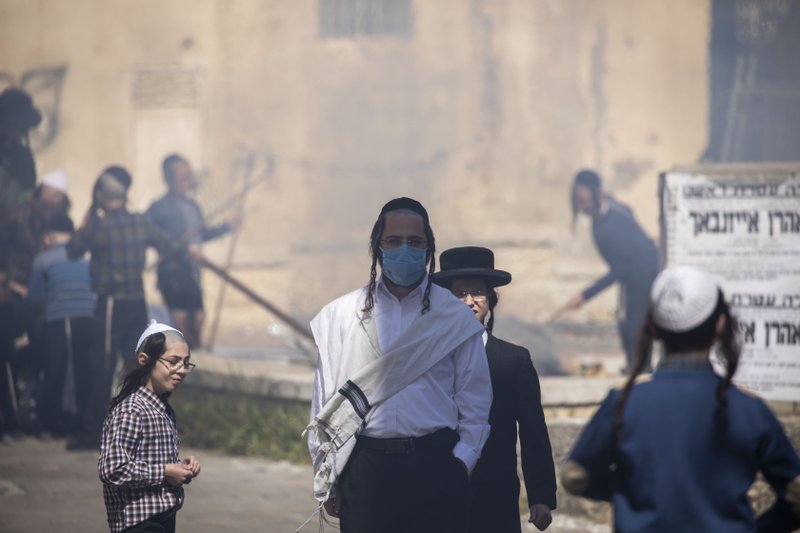 An ultra-Orthodox Jewish men wears a face mask as children burn leavened items in final preparation for the Passover holiday in the Orthodox neighborhood of Mea Shearim in Jerusalem, Wednesday, April 8, 2020. Jerusalem authorities have said they will gather the bread and burn it in a big bonfire in one location to avoid large gatherings. But, some in the Mea Shearim neighborhood shunned the orders. (Photo: AP)

Each year, Patricia Sheetrit and her family gather with in-laws for the first night of Passover, bringing together some 20 people for the holiday’s main event, the festive meal known as the Seder.

But like most Israelis, Sheetrit and her husband will be stuck at home this year — holding a bare-bones Seder for two.

“Everyone is sad and alone, and everyone is worried about one another,” Sheetrit said.

As a modern pandemic afflicts the globe, Israeli Jews are being forced to scale back or cancel beloved traditions and rituals marking Passover, the holiday celebrating Israelites’ freedom from Egyptian bondage and referencing biblical plagues.

Communal preparations have been canceled. Police are enforcing stay-at-home orders and a general lockdown through Friday morning. Families are turning to videoconferencing in hopes of capturing a small slice of the holiday spirit.

“There’s a lot of families, a lot of seniors, a lot of singles who will be having Seder alone, and that’s very challenging because this is really the family holiday,” said Rabbi Kenneth Brander, president of Ohr Torah Stone, a network of 27 modern Orthodox institutions.

The week-long festival starts Wednesday night with the Seder, a large meal that retells the Exodus story. A highlight of the joyous dinner is the chanting of the 10 plagues — the biblical afflictions that pushed the Pharaoh to free the Israelite slaves.

Ordinarily, most Israeli Jews — religious and secular alike — spend the Seder with extended family in an experience akin to Thanksgiving. It also is customary to invite strangers such as lone travelers or students.

But this year, Prime Minister Benjamin Netanyahu has ordered a general lockdown on Wednesday night, telling Israeli Jews that “every family will sit down for Seder night on its own.” Police plan to set up checkpoints in neighborhoods and on major highways to enforce travel restrictions.

Israel has over 9,400 confirmed cases of COVID-19, the illness caused by the new coronavirus, and at least 71 deaths.

Jews make up about 80% of Israel’s population. The pandemic is also disrupting other faiths’ celebrations this month, including the Christian holiday of Easter and the start of the Muslim holy month of Ramadan.

Despite growing anxiety over spiking unemployment, and political paralysis after three inconclusive elections in the past year, Israeli Jews are still trying to salvage some holiday spirit.

Jewish tradition prohibits the consumption of leavened goods and instead requires eating matzo, a crisp, unleavened flatbread. The week leading up to Passover is marked by frenetic cleaning and preparations.

In the run-up to the holiday, many religious neighborhoods around the country set up gigantic cauldrons of boiling water for dunking kitchenware to make them suitable for use on Passover. On the morning before the holiday commences, it’s traditional to burn leftover bread outdoors.

This year, the Health Ministry has banned both communal activities as a precaution, though a small group of people in one neighborhood was seen illicitly cleansing plates on Tuesday. On Wednesday, residents in an ultra-Orthodox neighborhood in Jerusalem defied the orders and burned their leavened bread in a dumpster.

City Hall set up containers for residents to dump their remaining baked products. The containers were collected, and the city was holding a massive bonfire Wednesday to destroy them.

Synagogues also have been closed and holiday prayers are to be held individually at home due to a ban on public gatherings.

“All the different things that happened both before and on Pesach, this year suddenly are not happening, or happening in very different ways than they always did,” said Rabbi Issamar Ginzberg, a Jerusalem-based ultra-Orthodox rabbi, referring to Passover by its Hebrew name.

Israel’s ultra-Orthodox population, which initially resisted safety precautions, has been hit especially hard by the outbreak, with an estimated 50% of the country’s cases. One ultra-Orthodox city, Bnei Brak, has been placed under a closure.

Ginzberg said he and most other ultra-Orthodox families are strictly observing social distancing rules. “This year everyone’s essentially staying home, nuclear family only, and no guests, which is also something unique,” he said.

The effect on Israel’s collective psyche after weeks of a climbing death toll and stringent social distancing will come to a fore at the time of the Seder, said Yoram Yovell, a Hebrew University psychiatrist.

Even in the most difficult times in Jewish history, Jews managed to celebrate with their extended families, Yovell said. The disruption of a key family event like Passover will be “very demoralizing and very anxiety provoking,” he said, adding that Muslim communities may experience a similar trauma when Ramadan arrives.

To raise spirits, several Israeli towns are calling on residents to sing songs from the Hagaddah, the text read at the Seder, from apartment balconies. Yovell suggested leaving the front door open so that people “can hear their neighbors and the neighbors can hear them.”

“That is a way of — while still complying with the social distancing regulations — getting a sense of togetherness,” Yovell said.

For many, Zoom videoconferencing will be the centerpiece of their Seder table this year. A group of Sephardic, or Middle Eastern, rabbis even issued a ruling permitting the elderly, sick and quarantined to use video chat during the holiday meal, despite an Orthodox prohibition on using electronics on holidays.

Sheetrit, who has three grown children and a young granddaughter, said her extended family intends to hold a digital Seder over Zoom — “to feel somewhat together during this loneliness.”