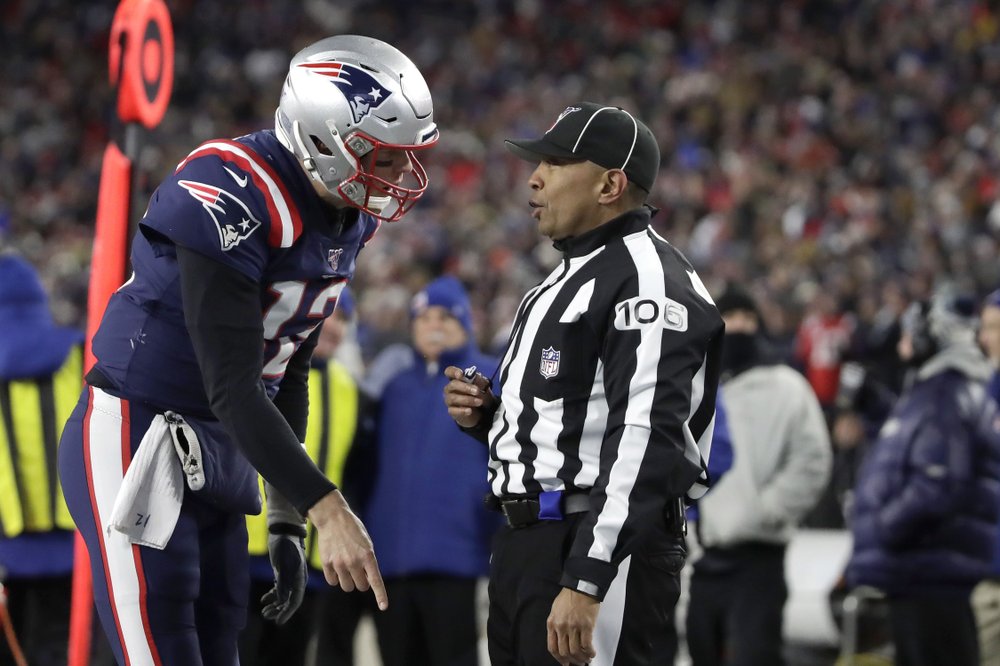 New England Patriots quarterback Tom Brady appeals to down judge Patrick Holt that wide receiver N'Keal Harry had scored a touchdown in the second half of an NFL football game against the Kansas City Chiefs, Sunday, Dec. 8, 2019, in Foxborough, Mass. (Photo: AP)

One day, things aren’t looking good at all for the New England Patriots. The next, the defending champs are grappling with a very bad look.

A day after officiating blunders and another poor passing performance by Tom Brady were the biggest takeaways from New England’s first home loss in two years, the Patriots acknowledged that a video crew working for the team filmed the Cincinnati sideline during the Bengals’ game at Cleveland.

Yes, another camera-spying flap from the team that brought the term “Spygate” into the NFL lexicon in 2007 when the Patriots were caught videotaping opposing team signals in a scandal that cost them a first-round draft pick and $250,000 and made Bill Belichick’s bank account $500,000 lighter.

Crucial calls made in the final minute of the Dolphins-Jets game and the 49ers-Saints showdown in a wild Week 14 were overshadowed by the Patriots’ mushrooming problems.

In a statement posted on Twitter and the team website, the Patriots said a three-person crew for a web series titled “Do Your Job” “inappropriately filmed the field from the press box” as part of a feature on the scouting department. The filming took place “without specific knowledge of league rules,” the statement said.

The Patriots said the Browns, the home team, granted the crew credentials but in an “unintended oversight,” the team failed to inform the Bengals or the NFL and when confronted, the crew “immediately turned over all footage to the league and cooperated fully,” the team said.

Spygate, as The AP’s Jimmy Golen wrote, helped fuel a widespread distrust of the team that reverberated a decade later when the Patriots were accused of illegally deflating footballs used in the 2015 AFC championship game. Brady has suspended four games, and the team was fined $1 million and docked another first-round draft pick.

A few years after Spygate, Josh McDaniels, who was head coach in Denver between stints as Brady’s offensive play-caller, was fired in the aftermath of a video scandal in which Steve Scarnecchia, the son of longtime Patriots offensive line coach Dante Scarnecchia and who followed McDaniels to Denver, illegally filmed the 49ers’ practice ahead of a 2010 game against the Broncos in London.

Asked about the latest vexing videotape reports during his radio show on Monday, Belichick told WEEI the video crew was completely separate from the football staff: “We have absolutely nothing to do with anything that they produce or direct or shoot. I have never seen any of their tapes or anything else. This is something that we 100% have zero involvement with.”

It hardly seems necessary for the Patriots (10-3) to need special intel on the signals of the Bengals (1-12). Then again, the Patriots’ past rap sheet means football fans outside New England don’t give them the benefit of the doubt.

On Sunday, the Patriots didn’t get the calls that seemingly always went their way at Gillette Stadium.

1. Travis Kelce’s fumble in the waning seconds of the third quarter. Hit by Devin McCourty, the Chief's tight end fumbles the football and Stephon Gilmore recovers with plenty of room to run toward the end zone. The play is blown dead, however, and Kelce ruled down by contact. Belichick uses his final challenge and the call is overturned. New England gets the ball at its 43.

2. The Patriots quickly drive to the Kansas City 15 and N’Keal Harry is ruled out of bounds at the 3 after an apparent touchdown catch from Brady with 13:22 remaining in the game. TV replays show Harry stayed inbounds on what should have been ruled a score. Belichick is out of challenges after losing one in which he asked for a better spot and offensive pass interference on a play earlier in the game but lost on both counts.

Three plays later, New England settled for a field goal to get to 23-16.

Boger told a pool reporter after the game that the covering official on the Harry play was blocked out by defenders.

“The downfield official who was on the goal line and looking back toward the field of play had that he stepped out at the 3-yard line,” Boger said. “So, they got together and conferred on that. The final ruling was that he was out of bounds at the 3-yard line.”

Because all scoring plays are reviewed, a ruling of touchdown would have ultimately gotten the call right, but Boger said he wasn’t inclined to overrule his crewmates to get to the fail-safe automatic review.

“Those two officials who are covering it, they look at it in real-time,” Boger said. “This case was unique in that the guy who would have ruled touchdown had him short. So maybe if the ruling official on the goal line had a touchdown, we could have gotten into that, but he thought that that guy stepped out of bounds. The goal line wasn’t in the play.”

3. Officials missed a defensive pass interference by cornerback Kendall Fuller on a deep pass to Phillip Dorsett with 3½ minutes remaining that would have spotted the ball at the Kansas City 6. The non-call brought up fourth-and-6 at the Kansas City 29 and Brady scrambled for 17 yards for a first down.

But on fourth-and-3 from the Kansas City 5-yard line, Bashaud Breeland expertly defended Brady’s pass to Julian Edelman in the end zone and knocked it away.

Brady’s 169 yards passing were his second-fewest this season, and the Patriots’ 21-game home winning streak, tied for longest in franchise history, was also finished.

Boger only addressed Harry’s TD-that-wasn’t after the game, not Kelce’s fumble, the uncalled pass interference or Donte Hightower’s late shove that sent Patrick Mahomes tumbling into the team’s coolers that drew no flag.