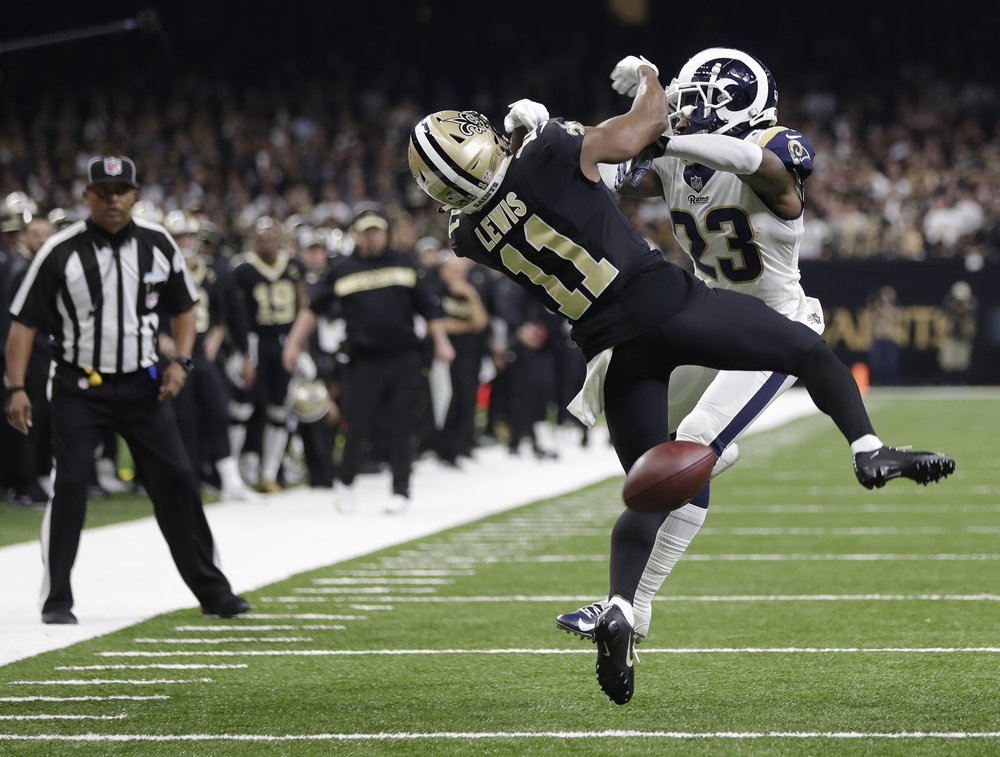 Yes, the Los Angeles Rams got away with a flagrant foul (or two) by cornerback Nickell Robey-Coleman that allowed them to sneak out of New Orleans with the NFC championship, right past the highway sign on the causeway over Lake Pontchartrain reading, ”WE WERE ROBBED .”

Yes, the Patriots won in Kansas City thanks to four critical calls going New England’s way in the fourth quarter, three of which were iffy: a replay reversal of Julian Edelman’s muffed punt , a phantom roughing-the-passer call on Chris Jones and Chris Hogan’s drive-sustaining one-handed catch with a little help from the ground.

“I thought the game was over,” Chiefs safety Daniel Sorensen said. “And it wasn’t.”

Just like the Saints did when Tommylee Lewis blatantly was interfered with inside the Los Angeles 5-yard line by Robey-Coleman, whose helmet-to-helmet hit didn’t draw the flag but will surely result in a hefty fine.

“I thought it was a flag for that split second,” acknowledged Robey-Coleman, who was as surprised as everyone else when two officials near the play ruled it an incomplete pass on third down with 1:45 remaining in regulation and the game tied at 20.

“I knew if that had been a flag, they probably would have scored on the next play,” Robey-Coleman said.

The call kept the Rams close as New Orleans settled for a field goal on the next play, Greg Zuerlein tied it in regulation with a 48-yarder and won it in overtime with a 57-yarder , two field goals that likely never would have happened had Robey-Coleman been flagged for clobbering Lewis well before the ball arrived.

On Monday, Saints wide receiver Michael Thomas implored NFL commissioner Roger Goodell to undo the outcome of the game , citing an NFL rule that allows for “the reversal of a game’s result or the rescheduling of a game, either from the beginning or from the point at which the extraordinary occurred.”

The league has never invoked the rule to reverse a game’s outcome.

The George Halas and Lamar Hunt Trophies may be smudged amid the backlash over the officiating gaffes, but they aren’t entirely tarnished because strategy and execution had as much to do with the outcomes of these overtime thrillers as the yellow flags that were or weren’t thrown.

The Rams (15-3) roared back from a pair of double-digit deficits to beat the Saints 26-23 in overtime because they stuck with the plan and didn’t panic after falling behind 13-0 in the first quarter and 20-10 in the third quarter.

After managing just 5 yards in the first quarter when nothing went right, the Rams righted themselves thanks to a fake punt and cut New Orleans’ lead to 13-10 at halftime.

“Our team demonstrated great mental toughness,” Rams coach Sean McVay said. “It was a tough start, but I thought the way (quarterback Jared Goff) played and handled the noise was outstanding.”

The Rams outscored the Saints 16-3 down the stretch.

The Patriots (13-5) overcame a 24-point fourth-quarter outburst fueled by Patrick Mahomes to beat the Chiefs 37-31 in overtime because Tom Brady was hardly touched, aside from Jones’ shoulder swipe that the officials thought hit him in the facemask.

New England’s much-maligned offensive line didn’t allow a single sack to the Chiefs, whose 52 sacks during the regular season were tied with the Steelers for the league lead and who pummeled Andrew Luck a week earlier, sacking him three times.

Brady “played great,” Patriots coach Bill Belichick said for what, the 1,000th time? “They were playing a lot of man coverage and it was either a good gain or an incompletion. ... They gave us some three-man rush and there was a lot of four-man rush with Justin Houston, Chris Jones and Dee Ford. Those are tough matchups. I thought they did a good job of standing up to those guys and giving Tom a chance to deliver the ball.”

In overtime, Brady, who has thrown 90 passes in the playoffs and has not been sacked a single time, converted a trio of third-and-10 pass plays on the winning touchdown drive.

“Brady got rid of the ball fast,” Jones said. “We didn’t get to the quarterback like we usually do.”

So the Patriots rushed for 176 yards and Brady threw for 348.

By dominating the time of possession — 44 minutes to 21 minutes — Brady and the Patriots kept Mahomes, Travis Kelce and Tyreek Hill on the sideline during most of the freezing night.

“You play on the road, it is going to be tough,” Brady said. “What travels well is running the ball and playing tough. That is good in any weather, any condition, any environment and any stadium.”