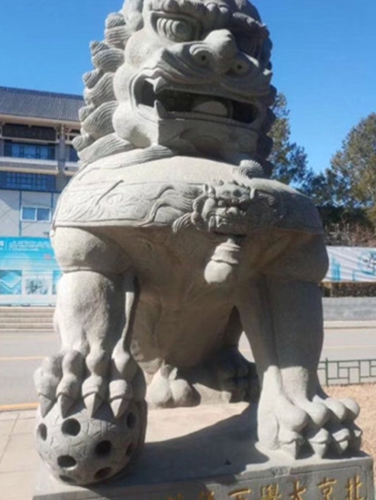 While most students at the prestigious Peking University were still at home due to the outbreak of novel coronavirus, a landmark stone lion statue on campus had its private parts mysteriously removed, which caused widespread concern and speculation.

The removal of the genitals of the stone lion, which sits in front of the university library, caught the attention of university students, with many saying, "It's cruel for a stone lion to receive such a sterilization operation."

A member of staff from the university library told the Global Times that there are a pair of lions in front of the library and she has no idea when the male lion was castrated.

This "cruel behavior against a lion" drew a huge response on the Peking University bbs on Thursday, topping its reading list at one point.

It prompted students to initiate a "restoration" scheme for the poor lion.  Some students suggest inviting students from the department of sculpture to customize a new set of genitals for the lion, while some said that as the lion was missing its private parts, repair staff should give him a pair of underpants.

Many students from the university joked that the perpetrators could have come from its neighbor and long-time rival — Tsinghua University.

The stone lion is one of the main landmarks of Peking University. Many visitors take photos with the lion when taking tours of the institution.