Penned lions still on offer at US trophy hunting convention 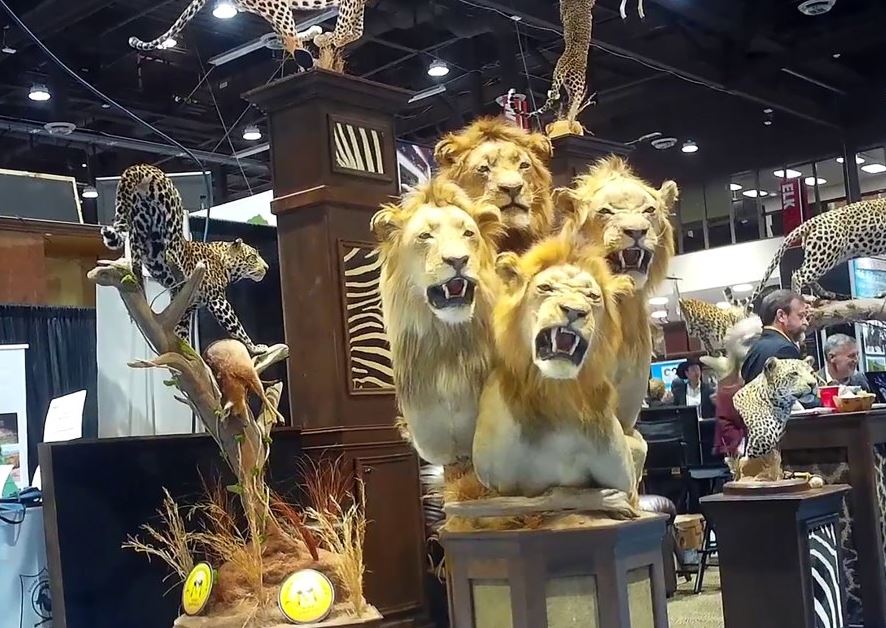 This image from video provided by the Humane Society of the United States shows a four-lion taxidermy at the Safari Club International's 2020 annual convention, that was held Feb. 5-8, 2020, in Reno, Nevada. (Photo: AP)

An undercover video recorded by animal welfare activists shows vendors at a recent trophy-hunting convention promoting trips to shoot captive-bred lions in Africa, despite past public assurances by the event’s organizers that so-called canned hunts wouldn’t be sold.

Investigators for the Humane Society of the United States captured the footage last week at the annual convention of Safari Club International in Reno, Nevada. SCI is among the nation’s largest trophy-hunting groups and its yearly gatherings typically draw thousands of attendees and hundreds of vendors selling firearms, overseas safari trips and items made from the skins and bones of rare wildlife.

In the video captured by the Humane Society last week, tour operators said the lions for sale were bred in captivity. Typically, the lions are raised in cages and small pens before being released into a larger fenced enclosure. Once reaching young adulthood, customers pay to shoot them and keep the skins, skulls, claws and other body parts for trophies.

“They’re bred in captivity. They’re born in captivity, and then they’re released,” a salesman for Bush Africa Safaris, a South African tour operator, says on the video. “There’s guys who are going to tell you something different on the floor, they’re going to bulls—t you, that is what it is.”

Salesmen from two other safari operators also confirmed they had captive-bred lions for sale.

“Canned lion hunts have no conservation value and are unethical,” said Kitty Block, president and CEO of the Humane Society of the United States. “Lions bred for the sole purpose of being hunted for a trophy is an industry built on a conveyor belt of exploitation and animal cruelty.”

In 2018, SCI issued a policy opposing the hunting of African lions bred in captivity, which the group said is of doubtful value to the conservation of lions in the wild. After the Humane Society captured video of canned hunts being sold at the SCI convention last year, SCI issued a statement pledging not to accept advertising from any operator selling such hunts, nor allow their sale in the vendor booths rented out at its annual convention.

In a statement Wednesday, SCI said it would continue to disallow vendors at its annual Hunter’s Convention from selling hunts for lions bred in captivity and from allowing vendors to advertise with the organization.

“Safari Club International (SCI) proudly supports the right to hunt; however, SCI does not condone the practice of canned hunting by our members, outfitters, or other partners,” the group said. “As sportsmen, we believe hunting is best enjoyed when certain fair chase criteria are met.”

Schalk and Terina van Heerden, the owners of Bush Africa Safaris in Ellisras, South Africa, did not immediately respond to an email seeking comment.

Despite tweets from President Donald Trump describing big-game hunting as a “horror show,” his administration has consistently moved to expand the list of nations from which the heads and hides of imperiled African elephants, lions and rhinos can be legally imported back into the United States as trophies.

An avid hunter, Donald Trump Jr. was among the featured speakers at the SCI convention last weekend. As part of the festivities, the group auctioned off a weeklong Alaskan “dream hunt” aboard a luxury yacht with the president’s eldest son. Two hunters paid a combined $340,000 to go on the trip.

“This convention does nothing other than celebrate senseless violence towards wildlife,” Block said. “Wild animals are not commodities to be sold, with their deaths something to celebrate. This needs to end.”