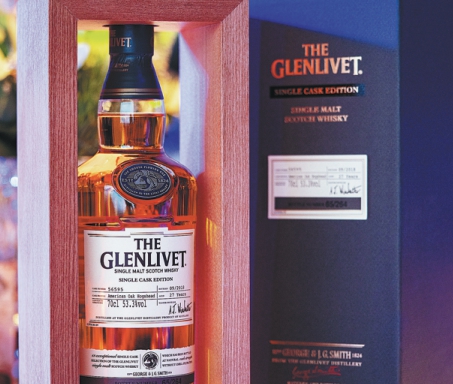 The Glenlivet is one of the most renowned whisky brands of Pernod Ricard.(Photo: VCG)

A sip from a warm dram of whisky, tinged with a soft yet intense fruity fragrance, is not just a tonic to slake the thirst, but also a unique cultural experience deeply rooted in its place of origin.

Just as the aroma of apricot jam and vanilla fudge peeling off the 27-year-old Glenlivet single cask malt whisky may remind you of crisp clean air, pine forests and the crystal waters of River Spey in Speyside, northeastern Scotland, a new type of whisky is set to create its own unique identity in China.

The world's leading spirits producer, Pernod Ricard, is to create a taste of the company's distillation and fermentation techniques intermingled with the natural endowments of Emeishan city in Southwest China's Sichuan province.

A new 13-hectare single malt whisky distillery is to be built in Emeishan with an investment of some 1 billion yuan ($150 million) over the next decade, the company said. The distillery, the first of its kind in China, will start production in 2021.

"We're proud to be part of China's fabric and contributing to the sustainable growth of its economy and society, by transferring whisky-making expertise to the people, credibility to the region and the spirit of conviviality to visitors and consumers alike," said Philippe Guettat, chairman and CEO of Pernod Ricard Asia, at the ground-breaking ceremony of the distillery in Emeishan last week.

The distillery will appoint a Chinese master distiller, fusing authentic whisky-making craftsmanship and local knowledge to create a new type of malt whisky, he said.

Guettat added that Emeishan boasts the perfect natural conditions for making whiskies such as fertile soil, a humid climate and good water quality, as well as a tradition for spirits.

"And, the place is listed as a UNESCO World Heritage site with 10 to 20 million visits annually," he said. "We hope to build the distillery as a landmark for cultural tourism in the future."

He noted that an immersive visitor center will also be built and is scheduled to open in 2021. It is expected to be a world-class destination for promoting whisky culture with a goal of attracting more than 2 million tourists over the first decade.

Tracy Kwan, vice-president of marketing at Pernod Ricard Asia, said that there has been a surge in China's whisky market in recent times, with Chinese consumers not just seeking out the spirit but also looking for diversified tastes, origins and cultures.

"We will make a unique and all-new whisky tailored for Chinese consumers at the Emeishan distillery, combining our advanced techniques with climate, water and raw materials."

She said that the distillery will preserve local resources and the natural environment through a vernacular design approach.

For instance, the materials used throughout will take their influence from the distillery's location, with stone walls built from boulders extracted from the ground during leveling and roof tiles assembled by a mixture of reclaimed and new tiles in the region, to infuse history and local heritage into the design.

This will be accented by the materials used in whisky craft itself, from copper and metal referencing copper distillation tanks to wood referencing aged oak casks.

The result will be a fine-tuned balance of rustic and refined, hard and soft, cool and warm, natural and crafted - a representation of the yin and yang in Chinese culture, the company said.

Jean-Etienne Gourgues, managing director of Pernod Ricard China, said the key for Pernod Ricard is to create an unparalleled experience that roots itself in raw materials and local customs.

"The market is expected to witness a double-digit increase in the next five years. With the uprising of the middle-class and change in social culture, Chinese consumers are diversifying their needs for alcohol products," said Wang.

Data from the National Bureau of Statistics show that the total baijiu production generated in China reached some 4.56 million kiloliters in the first seven months of 2019, up 1.06 percent year-on-year. The accumulated sales revenue surpassed 323.38 billion yuan, an annual increase of 10.47 percent, with net profit totaling 80.56 billion yuan, up 22.23 percent year-on-year.

The sales revenue of Pernod Ricard reached 9.18 billion euros ($10 billion) in the 2018 fiscal year ended on June 30. Its sales growth in China was up 21 percent year-on-year. Over the past two decades, Pernod Ricard has led in China's whisky market with a rich portfolio of renowned brands, including Chivas Regal, Ballantine's, Royal Salute, The Glenlivet, Aberlour, Longmorn and Jameson.