The huge demand related to spending leisure time with children during the weekend is creating opportunities for indoor petting zoos in China, a new form of business that has received wide attention from investors amid the "capital winter" this year. 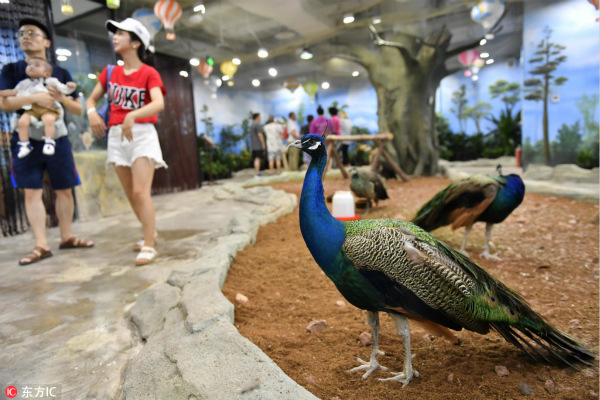 As a mini version of a traditional zoo, the indoor petting zoo mainly houses aquatic animals and animals such as pigs, rabbits and lizards. With an average area of 800 square meters, they are usually located in shopping malls in cities.

"It is just a fantastic way to achieve two things. Kids just naturally love animals while we parents feel relief as we don't need to prepare a lot to go to a big zoo that is usually far away," said Zhao Qinghua, a 31-year-old mother from Shanghai.

It was the third time within a month that Zhao had taken her four-year-old daughter to visit an indoor petting zoo near their home.

"She (her daughter) doesn't seem to get bored because she can feel and touch and even play with some animals there, which is much more interesting than any of the entertainment downtown during the weekend," Zhao noted.

Currently in China, at least 20 indoor petting zoo companies are competing for the big cake with more than 100 such zoos emerging nationwide.

Though most firms have encountered difficulties in raising funds amid the "capital winter", Shanghai-based Mr Zoo has finished three rounds of fundraising this year.

The total funds raised have fallen by 10 percent on a yearly basis to 1.08 trillion yuan ($153 billion) during the first 11 months of this year, according to a report from venture capital and private equity research firm Zero2IPO.

"As we now stand at a turning point of family consumption, Mr Zoo has removed the reliance on location which was the case with traditional zoos. It has found new growth engines," said Liu Fangwei, a partner of Fosun RZ Capital.

Zuo Qiang, founder of Mr Zoo, said that such revenue already accounted for over half of the firm's total revenue.

"We have paid more attention in verifying the content. Also, we hope to make parents more engaged in such a process," Zuo said.

The new mode speaks for itself. The company has already five stores and six upcoming stores in Shanghai and Suzhou and plans to open 40 to 50 stores in Nanjing and Beijing next year.

Zhu Lin, managing partner of investment firm Gobi Partners, pointed out that the combination of mall, zoo, parent and child is a brand new business model and is set to have great potential in the future.