A photo exhibition marking the 70th anniversary of the founding of the People's Republic of China (PRC) has opened at the UN headquarters in New York. UN Secretary General Antonio Guterres and Chinese State Councilor and Foreign Minister Wang Yi attended the Thursday night's event, together with foreign ministers from the Philippines, Ecuador, Laos, the United Arab Emirates, Vietnam, Saudi Arabia, the Democratic People's Republic of Korea, Russia, Pakistan and permanent representatives to the UN from various countries. 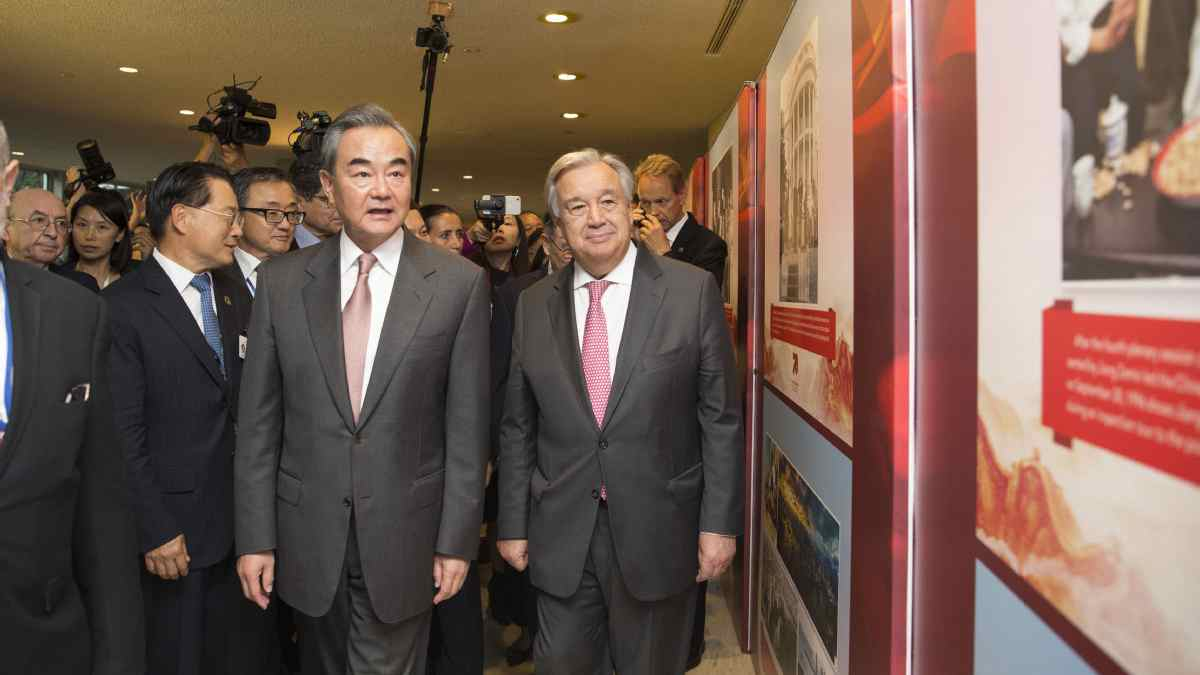 Wang Yi (C) and Antonio Guterres (R) visit the photo exhibition to celebrate the 70th anniversary of the founding of the People's republic of China at the UN headquarters in New York on Thursday. /Photo Liao Pan from CNS. (File photo: CGTN)

Wang Yi said the photos presented there docomented the true story of Chinese people jointly working hard, the glorious achievements of China's development, and also how China continiously get involved into the world, and make great contributions to the world. The story is about Chinese manufacture, poverty alleviation for mankind, unity among ethnic groups, eclogical civilization, peaceful development, win-win cooperation, and a community with a shared future.

The exhibition also includes stories about the Belt and Road Initiative.

The minister said, "We will seek peace and cooperation with all countries in the world, and we will contribute our share to world peace, international development.

"We work with all countries to create a better future for the entire humanity," he added.

UN Secretary-General Antonio Guterres congratulated the Chinese government and people on making such impressive achievements in the past 70 years.

"Every time I visited China, I'm stunned by the speed of change of progress," he said. He also noted that China has created one of "the most dynamic economies in the world," and helped more than 0.85 billion people out of poverty, which is the greatest poverty alleviation achievement in history.

The secretary-general also gave a nod to China's contributions to the UN and the world. He said, "(China) has actively participated in all work as a builder of international cooperation and multilateralism and a steady partner of the United Nations, especially for UN peacekeeping."

At a time when the UN is about to celebrate its 75th anniversary since its founding, Guterres said global partnerships need to be rebuilt, to support a multilateral solution for responding to global crises. He expects China's continuous commitment and contribution to build a better world for everyone.