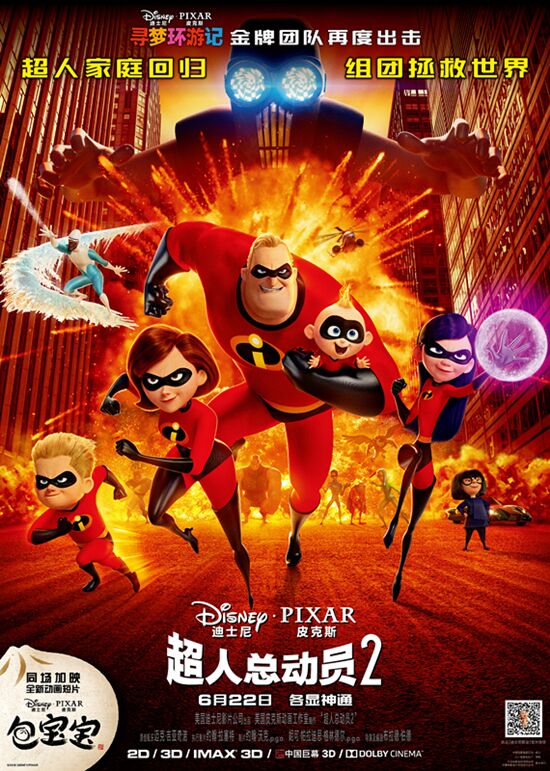 Disney Pixar's "Incredibles 2" is set for a June release after the debut of its first installment in China 14 years ago.

"Incredibles 2," a sequel to critically claimed box office animated hit "The Incredibles," is once again written and directed by Brad Bird who penned and directed the first movie. With the continued evolution of technology over the last decade, the new installment will contain an upgraded storyline as well as audio and visual experiences.

To Chinese fans' surprise and delight, China will also screen "Bao," Pixar's accompanying short film for "Incredibles 2." Previously the traditional short films for accompanying Pixar films would normally be cut out in China. But "Bao" is a cute Chinese story, directed by Domee Shi, and tells the story of an unexpected magical interaction between a lonely Chinese mother and her homemade steamed stuffed bun.

Pixar Animation Studios' animated features are known for their Academy Award-winning high-quality, but strangely enough it never quite appealed to Chinese movie-goers and suffered low box office returns. But the most recent release, "Coco," grossed a stunning haul of 1.2 billion yuan (US$189 million) as well as high praise from critics and the audience.

"Incredibles 2" will be released in China on June 22, just one week later than North America which is due for release on June 15.

Disney's films seem set to dominate the Chinese market in the early session of this summer, with "Avengers: Infinity War" passing beyond the 2 billion yuan (US$313 million) mark on Wednesday to become one of the highest grossing films in China, while "Solo: A Star Wars Story" is set to open in the country on Friday.