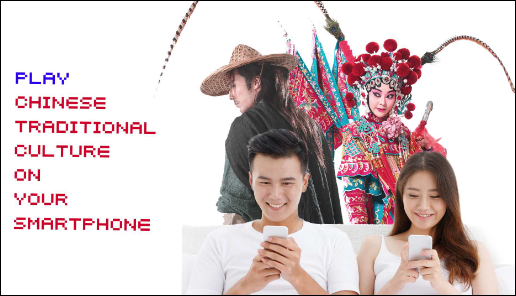 Playing online Mahjong with your friends might be a fun way to pass the time, but it's not the only way if you're into smartphone games inspired by traditional Chinese culture.

“Nishan Shaman,” a new mobile game produced by NEXT studio, brings the timeworn legend from Manchu's Shamanism culture to life.

As you're tapping away to finish a task in the game, you can suddenly be immersed in a mini-musical. Such a synesthetic experience has garnered acclaim for the game at the CAFA Game Art Exhibition “Re-recognition of Game: Play Beyond Games.”

“The whole thing began with my accidental glance at a photograph of a Manchu Shaman's costume. I was instantly hooked by its kooky shape and bright colors,” recalled Feng Xiao, the game's art designer. “Later, I learned the story from a Manchu colleague and was totally amazed by Nishan Shaman's strong character.”

The game is beautifully made: Nishan with her Shaman drum is centered in the paper-cut game screen and a giant acoustic shield is built by the beats of the constant drumming.

“The shield offers graphic meanings to the narrative while creating a sense of security for the players,” Feng said. “The paper-cutting style highlights another cultural reference to Manchu-ethnic minorities and the animation resembles a Chinese shadow show.”

Since music is essential for a game based on rhythm, it was difficult to make the soundtrack.

After learning about the Manchu legend, Cheng Huicong from the Shanghai Conservatory of Music began to write music echoing its narratives and emotions. However, the real challenge was how to make the soundtrack playable.

“Every piece of music in the game was calculated by the second,” Feng told CGTN, “so that it could perfectly match each difficulty level.”

“The soundtracks, although composed in the Shamanic style, must possess a lingering charm to keep modern people playing,” she added.

With nearly 100 video games being presented, the “Re-recognition of Game” exhibition at the CAFA Art Museum explores the combination of games with other fields such as art, education, and medicine.

Moreover, many of them are trying to bring traditional Chinese culture to the modern world by making it interactive and playable on mobile phones.

Tag UX Design, an independent game studio in Beijing, explores the potential of digital entertainment and education in traditional cultures.

The studio presents two from its game series of national crafts at the exhibition, namely "Folding Fan" and "Mortise & Tenon."

The former game concentrates on the Chinese folding fan, which dates back to the 6th century. Highly admired, the folding fan is cast as the protagonist of the refreshing mobile game.

“Folding Fan” provides players living in a highly industrialized world with a chance to closely appreciate the delicacy of time-honored handicrafts. However, in the game, the exquisite gadget is deconstructed into rivet, slips, and leaves so that players can take look at every detail of a fan.

“Mortise & Tenon,” as the game's name indicates, focus on the traditional woodworking joint used worldwide for thousands of years, especially in ancient Chinese architecture. Like “Folding Fan,” 31 models of different mortise-and-tenon wood joints are displayed from all angles so that the structure of every mortise and tenon can be clearly perceived.

Playing video games doesn't have to be exciting. It can be soothing and educational as well.

With fingers tapping to select wood and lacquer, a player is transformed into a carpenter to better examine traditional Chinese carpentry.

“The two games from Tag UX Design are unconventional but very easy and fun. What impresses me most is that they both are extremely educational,” said Odd Mozart from Tap Tap, a gaming review platform in China.

As more game designers turn to traditional Chinese culture for inspiration, maybe future generations will get their first impressions of ancient traditions from playing mobile games on electronic devices instead of from festivals or celebrations.