CULTURE Poetess' use of verse to battle adversity

Poetess' use of verse to battle adversity 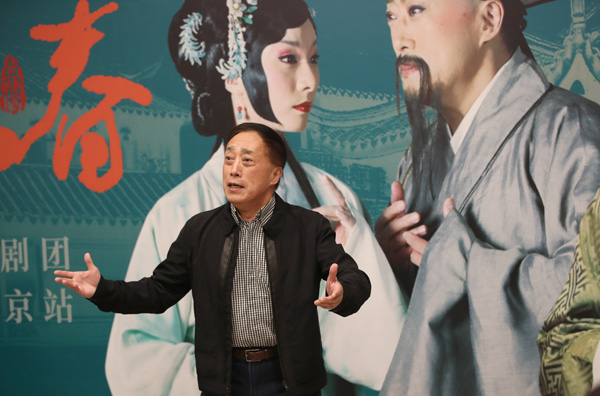 When Li Baochun, a 69-year-old Peking Opera master, decided to produce a new piece based on Li Qingzhao, he decided to take a different approach.

Li Qingzhao, who lived in the Song Dynasty (960-1279), is recognized as one of China's greatest poets. And she stood out in a literary world, which was dominated by men.

In the show entitled Qing Hui Lang Zhao, or She and Her Men, Li portrays the poetess as a bold and pioneering woman who overcame bad relationships.

She became a widow after her first husband, Zhao Mingcheng, an official, died during a military invasion, and later she married Zhang Ruzhou, an abusive man, who she subsequently divorced.

"Li was a highly educated woman, though at that time, women had a low status in society and were not encouraged to go to school.

"Even with her marriages, Li Qingzhao broke convention," says Li Baochun, who is the scriptwriter and director of the new show, in which he plays the role of Zhang Ruzhou.

Speaking about the show, which was staged in Beijing on April 7, Li says: "You will get a fresh understanding about Li Qingzhao's poems after learning about her life experiences."

As for the cast, the show features actors from Li's Taipei Li-yuan Peking Opera Theater, which he founded in 1998 after he moved to Taiwan. And prominent among them is actress Chen Yuxuan, who plays the role of Li Qingzhao.

The current tour of the show, which runs through April 29, began in Changsha, Hunan province, on March 29, and will also cover mainland cities such as Shanghai, Jinan in Shandong province and Tianjin.

Meanwhile, as part of the tour, Li Baochun is also staging another Peking Opera piece, The Orphan of Zhao, which he reworked with a different ending from the original.

The original piece written by Yuan Dynasty (1271-1368) dramatist Ji Junxiang tells the story of an orphan's revenge. And it was one of the first major Chinese plays to be translated into European languages.

In the original version, Cheng Ying, a doctor, sacrifices his son to save the infant of the royal Zhao family, Zhao Wu. But when the orphan grows up, he gets revenge by killing Tu'an Gu, who framed and killed his family members when he was an infant.

In Li Baochun's version, Tu'an Gu is imprisoned in the end with the help of Cheng Ying, and Zhao Wu reunites with his family.

Speaking about his reworked effort, Li says: "In the original piece, there are many violent scenes. So, I kept all the classic singing parts but changed the ending because I like a happy story. And it is more important to let things go rather than kill."

But he adds that he was worried about audience reaction, and he was relieved only after the show was staged in Changsha in late March.

Commenting on the reactions to his work, he says: "It's common to see, when we put on a new show, that some members of the audience are thrilled, shaking their heads to the music, while others block their ears and leave the theater. But we never stop trying out new ideas."

Both the shows combine performance techniques from Peking Opera and Kunqu Opera to portray different roles.

And Li also gets his longtime collaborator, composer Chung Yiu-Kwong, to work on the two shows.

Chung, who was born in Hong Kong and moved to Taiwan in 1991, is known for his orchestral and stage works, which fuse Western musical styles with Eastern sounds.

Speaking about his work, Chung says: "I was trained as a classical musician. And after 20 years of working with Li Baochun, I know he is not afraid of trying new sounds for his shows. As long as the music serves the role well, he will go for it.

"Our fans are often curious about our band arrangements since they sound different from a traditional Peking Opera band."

As for Li, his relationship with Peking Opera has been an uneven one despite his pedigree.

Li, who is the son of the late Peking Opera master Li Shaochun (1911-75), was born in Beijing, and studied lao sheng, elderly male roles, and wu sheng, male martial arts roles, for Peking Opera at the Beijing Theater Arts School from the age of 10.

After graduating in 1969, he worked at the China Peking Opera Theater, now the China National Peking Opera Company, before moving to the United States with his family in the late 1980s.

There, he almost quit acting, and opened an ice-cream shop. Peking Opera, like many other old art forms in China, is struggling to survive in the modern age.

But he says the art form is in his DNA. And every year, he travels around the world to watch various shows, ranging from contemporary dance to rock concerts, which remind him of returning to what he does best: Peking Opera.

Now, after founding his Peking Opera troupe in 1987 with the help of the Taipei-based C.F. Koo Foundation, Li Baochun has produced nearly 50 original Peking Opera works, which have been staged about 200 times.

The foundation was set up by the late diplomat Koo Chen-fu, also known as C.F. Koo, to promote cross-Straits exchanges and Peking Opera in Taiwan.

Li's works are based on traditional Peking Opera, and see new elements and techniques added. Examples of his work include Yun Luo Mountain, a reworked version of a classic Peking Opera work, in which Li Baochun's father performed; and The Jester, a Peking Opera version of Giuseppe Verdi's classical opera, Rigoletto.

For now, things are looking a bit better for Peking Opera.

About a decade ago, the Taipei Li-yuan Peking Opera Theater started touring the Chinese mainland; and Li Baochun now invites Peking Opera masters to perform in Taiwan and coach actors and actresses there.