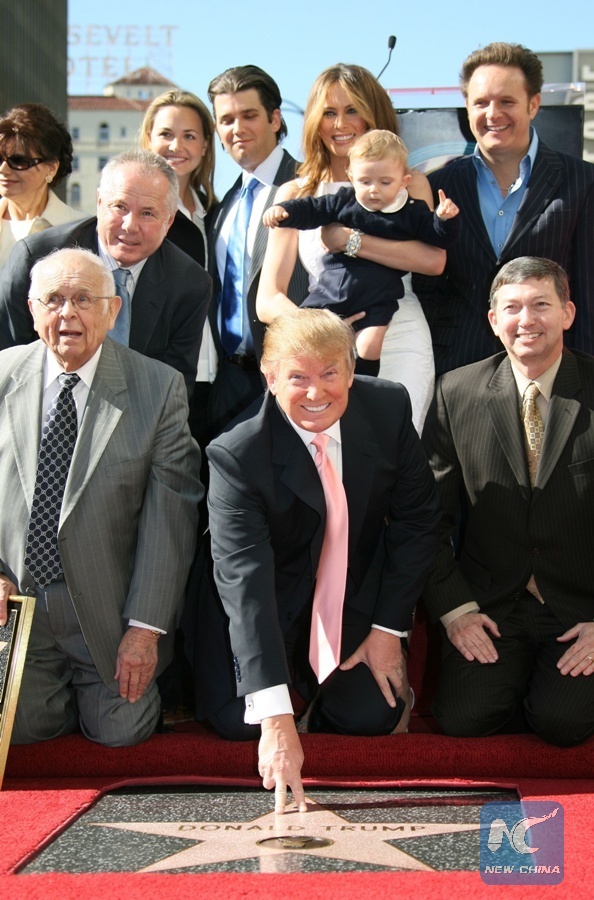 This file photo taken on January 16, 2007 shows US billionaire Donald Trump (C), the producer of NBC's The Apprentice, poses after he was honored by the 2,327th star on the Hollywood Walk of Fame on Hollywood Boulevard in Hollywood, the US state of California. (Photo: Xinhua/ AFP)

West Hollywood Mayor John Duran and Councilwoman Lindsey Horvath offered a resolution Monday night urging the Hollywood Chamber of Commerce to remove the president's star "due to his disturbing treatment of women and other actions that do not meet the shared values of the City of West Hollywood, the region, state, and country."

The City Council voted unanimously, and passed the resolution. The decision will ultimately be up to the Hollywood Chamber of Commerce.

The council's staff report on the resolution also cited the Trump administration's separation of immigrant families at the US border and Trump's "denial of findings from the United States intelligence community regarding Russian interference in the 2016 election and continued refusal to hold Russia accountable for its crimes."

The Hollywood Chamber of Commerce has never removed a marker from the Walk of Fame and turned down a 2015 request to remove comedian Bill Cosby's star.

Following the vandalism, the CEO of the Hollywood Chamber of Commerce, which administers the Walk of Fame, urged would-be vandals to vote if they wanted to make a political statement.

Trump earned his star back in 2007. Trump's star is currently boarded over.