Poppies are tougher than they look and can be sown early 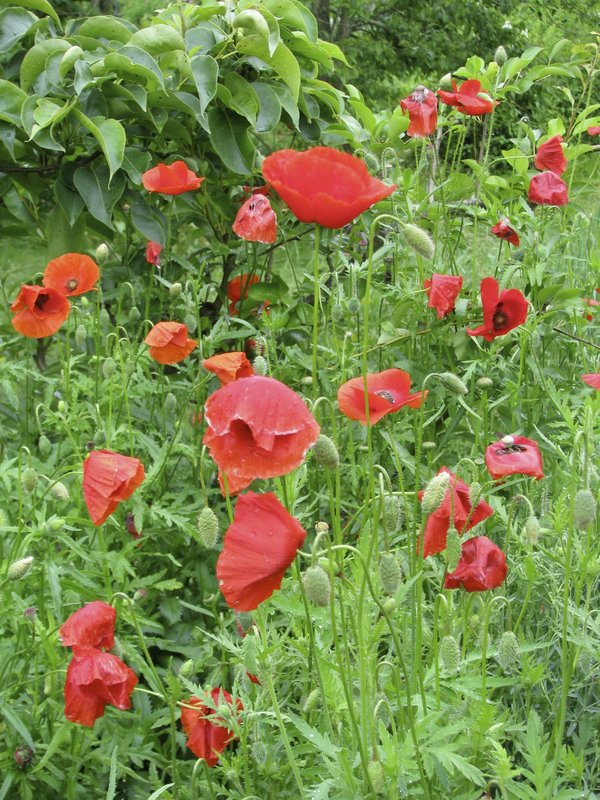 With seeds as fine as dust and flower petals as delicate as fairy shawls, it might seem that poppies are too fragile to have their seeds sown directly on melting snow or frozen ground.

But early sowing is a must, because the seedlings thrive during the cool, moist weather of early spring. And because poppies don’t transplant well, their seeds are best sown right out in the flower beds.

Members of the poppy family, Papaveraceae, span the globe from the Arctic to the tropics, but their flowers share a common quality. “The poppy is the most transparent and delicate of all blossoms. Other flowers rely on the texture of their surface for color. The poppy is painted glass; it never glows so brightly as when the sun shines through it,” wrote John Ruskin over a hundred years ago.

A HANDFUL OF ANNUAL POPPIES

Corn poppy (Papaver rhoeas) is aptly named for it once dotted the corn fields of Europe with its brilliant red flowers. (“Corn” means “grain” in British English.) This annual’s translucent flowers are borne on sprawling stalks 2 feet high.

The Flanders variety is named for the World War I poem “In Flanders Fields,” by John McCrae, in which the blood-red flowers symbolize lives lost in war. On Memorial and Veteran’s days, red tissue-paper poppies still are distributed in memory of wars’ victims.

Shirley poppies are a type of corn poppy with white lines along the edges of their petals. Corn and Shirley poppies begin blooming shortly after spring-flowering bulbs have finished their show, and continue blooming through July.

California poppy (Eschscholtzis californica) was named in honor of Dr. Johann Friedrich von Eschscholtz, a 19th century ship’s surgeon who found these bright orange flowers blanketing California hillsides. Northern winters are too harsh for this perennial, but it can be treated as an annual with the seeds sown yearly. From June to October, the 3- to 5-inch blooms of California poppies stare out above their lacy foliage. New varieties are available in a range of colors — cream, carmine, orange, yellow and red. I plant these flowers in the sunniest spots of the garden because they stay closed at night and even in shade.

Iceland poppies (P. nudicaule) have delicately ruffled and sweetly scented flowers, and are borne on slender stalks above rosettes of deeply cut leaves. Like California poppy, Iceland poppy is perennial in its native habitat, in this case the Arctic. In most other regions, it loses its perennial character to behave like a biennial. Plants from spring sowings bloom from midsummer into fall of their first year. The second year, the luxuriant blossoms unfold shortly after daffodils bloom, and then continue throughout the season.

The old-fashioned oriental poppy (P. oriental) is the only garden perennial among the poppies. Propagate it either from seed or by root cuttings. With huge, flamboyant, brick-red flowers having purplish-black splotches at the bases of their petals, this poppy has few rivals for intense color in the flower garden.

The blossoming period is relatively short, in early summer. Soon after that, the blossoms fade, the leaves die back and the plant enters a period of dormancy until late summer. To mask the dying foliage and carry on a succession of blooms, I plant zinnias and calendulas among the poppies.

All these poppies — corn poppies, Shirley poppies, Icelandic poppies, California poppies and oriental poppies — thrive on neglect. Sprinkle the seeds onto well-drained soil — even now, in winter— and then forget about them. Poppies are flowers of cottage gardens and meadows, rather than neatly groomed, formal flower beds. Let them sprawl, their flowers flopping about on the ends of stalks, splashing bright colors against mute green foliage.