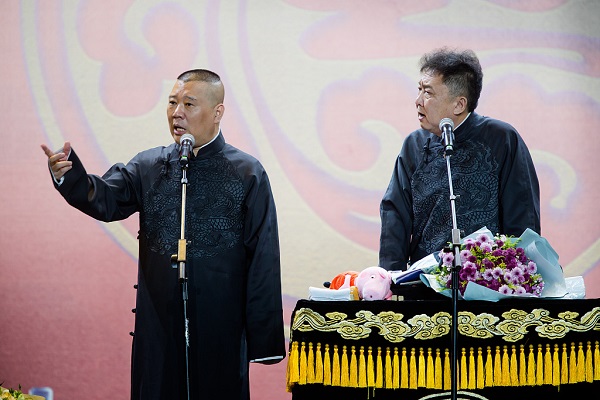 Together with his students from his De Yun She Performance Group, Guo and his partner, Yu Qian, performed at the iconic comedy venue Eventim Apollo, known by British audience as Hammersmith Apollo, located in west London's riverside district.

A constant ripple of laughter and applause from a packed audience punctuated the three-hour performance, which featured various topics from daily lives of the Chinese people both at home and abroad.

Some 3,000 audience enjoyed the show, many of whom were still waiting patiently in a long queue to enter the theater when the performance kicked off at 1900 GMT.

Britain is widely acclaimed for its comedy in the Anglophone world. Eventim Apollo, which was opened in 1932, is one of the best-known comedy venues around the globe.

When answering a question from Xinhua at a press conference two days before the performance, Guo said that comedy knows no border, so does happiness.

He added that his performance can help many overseas Chinese overcome homesickness, and can also help Chinese learners in foreign countries understand and enjoy Chinese crosstalk because this art form is part of the Chinese culture.

However, he acknowledged that the crosstalk, an art form performed in the Chinese language, is difficult for foreigners who do not speak Chinese.

Lord Michael Bates, the British minister of state at the Department for International Development, said that the performance is conducive to boosting friendship between the two peoples.

Liu Kai, a key organizer of the performance, told Xinhua that the Sunday show is Guo's first performance in Britain, and his entertainment was well received in Los Angles, New York and Vancouver before his arrival in London.

Guo will perform in Manchester on Monday night before his planned performance in Dubai later this week, he said.

"This shows the great vitality of the traditional Chinese crosstalk," an art form which was created in Beijing more than 100 years ago, Liu added.