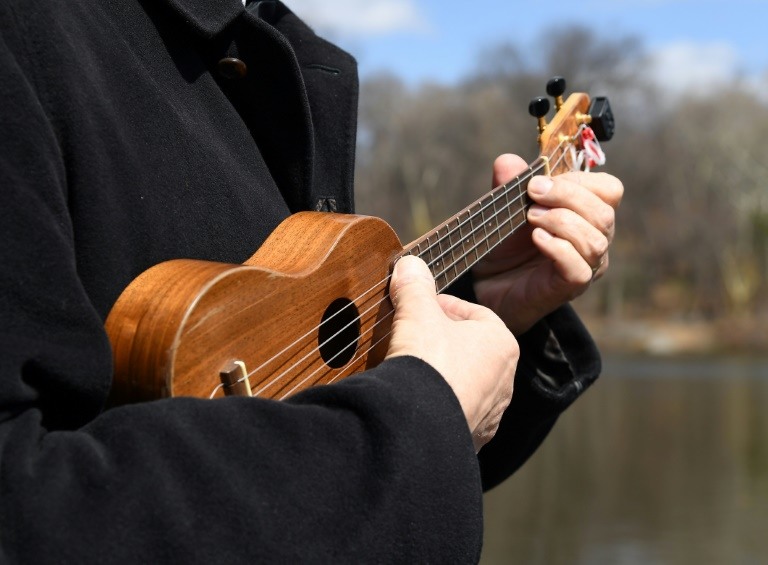 A member of the Ukulele Orchestra of Great Britain, which has managed to infuse the unassuming instrument with a punk-rock spirit, playing recently in New York's Central Park （Photo: AFP)

The ukulele has two obvious selling points: it is affordable and easy to carry. But could the unassuming four-string instrument also incarnate the spirit of punk rock?

Since forming three decades ago, the Ukulele Orchestra of Great Britain has helped build a new audience for what it calls the "bonsai guitar," playing musically faithful but thoroughly tongue-in-cheek renditions of popular tunes.

Starting its latest US tour, the orchestra -- clad in evening finest, including tuxedo jackets and bow ties -- quickly pulled in dozens of smartphone-snapping onlookers as the eight ukuleleists strummed their way through AC/DC's "Highway to Hell."

Playing with the Australian headbangers' poetry, soloist Ben Rouse sang, "Hey Satan / Paying my dues / Playing in a ukulele band," as the players raised their instruments to the heavens in mock defiance.

Asked why he took up the ukulele, fellow player Jonty Bankes said, "Basically, it's cheap and rather easy to play, so for people like us it was a godsend."

But the self-styled orchestra has noticed a power in the tiny instrument over the years -- with gigs including two nights at Carnegie Hall, a set at the Glastonbury Festival in England and a private party at Windsor Castle for Queen Elizabeth II's 90th birthday.

"The thing is, when you bring a ukulele out and start playing it, it does actually make people smile," Bankes said.

"It's an unthreatening, friendly instrument which causes a bit of happiness worldwide, really," he said.

Co-founded by Kitty Lux -- whose death last year at 59 brought a rare serious note to the ensemble with a memorial concert -- the group initially was interested not in the ukulele itself but in the irreverent energy of punk rock, then on its wane.

"Punks could form a band and play three chords, if indeed they could play three. The way that the band started, the same thing happened" said Leisa Rea, who nonetheless had learned guitar before ukulele.

"The instrument was a bit of a joke, I suppose, and we turned everything on its head. The spirit of punk is alive in the band," she said.

"We don't take ourselves too seriously. We're British, so we've got to have some sense of humor, really," she said.

Rea fronted the group for its take of the Eurythmics' "Sweet Dreams (Are Made of This)," with an amplified bass ukulele holding the rhythm under seven ukuleles of different pitches.

"It's a good way of detecting if a song is any good," she said. "If you can play it on a ukulele, it's a pretty good sign that it's a decent song."

Despite the orchestra's wide travels, it has never played in Hawaii, the birthplace of the instrument initially modeled after a miniature Portuguese guitar.

The group is eager to make it to the island chain, but its failure so far to make it there is not entirely accidental. The orchestra avoids Hawaiian music -- as well as songs of early 20th-century British film star and ukulele enthusiast George Formby -- as it instead tries to surprise audiences.

But the ukulele has become less of an oddity for audiences since the band's formation in 1985. Native Hawaiian artist Israel Kamakawiwo'ole found an international following in the 1990s with his mellow ukulele songs, while pop artists, notably the indie rock godfather Stephin Merritt, have found ample possibilities with the ukulele.

Orchestra member Dave Suich said he hoped the group has helped increase the popularity of the ukulele, especially in schools, where the little four-stringer has been giving stiff competition to the recorder as a first instrument for children.

"People younger than 40 don't know that it's funny," Suich said. "They just think you play an instrument."