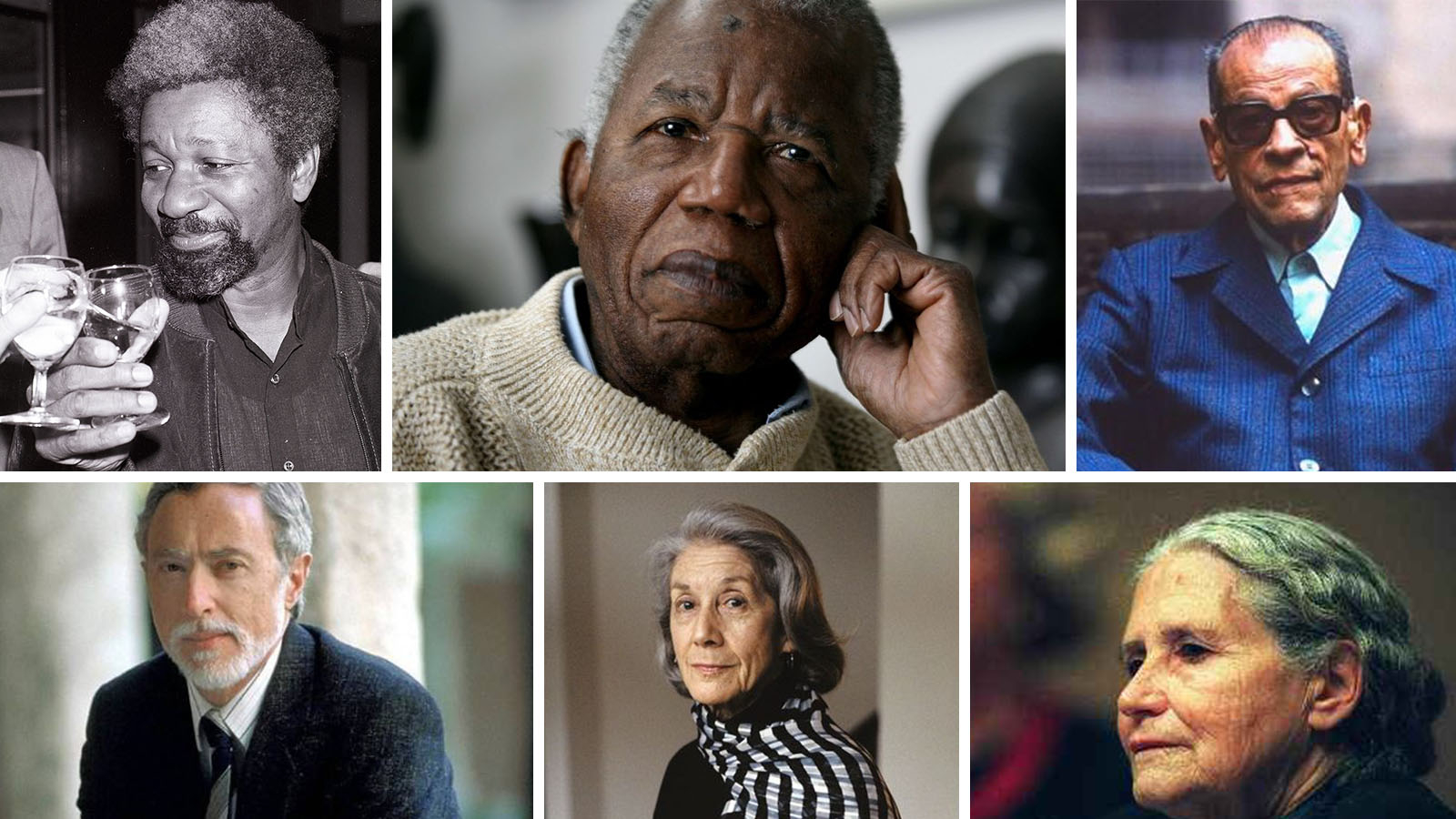 African literature has been gaining in popularity over the past decade. (Photo: CGTN)

Okonkwo was popularly called the 'Roaring Flame.' As he looked into the log fire he recalled the name. He was a flaming fire. How then could he have begotten a son like Nwoye, degenerate and effeminate...He sighed heavily, and as if in sympathy the smoldering log also sighed. And immediately Okonkwo's eyes were opened and he saw the whole matter clearly. Living fire begets cold, impotent ash."

Thoughtful lines as such, written by Nigerian Chinua Achebe, one of the most influential post-colonial African writers, in his classic Things Fall Apart, had jolted the world out of the ignorance about the beauty of native African literature back in 1950s, marking African people's effort and struggle disentangle their identities from the colonial past.

With their profundity, the works' significance has dwindled little into the 21st century in countering the oversimplified stereotype of the land that's more than often labeled as savage and primitive.

For people who have never set foot on Africa, it is tempting to define the continent with popular news headlines and tourist handbooks. True as they may be as far as the local political and economical landscape are concerned, what could have missed in them is the depth needed to understand the land where human civilization was born is another matter.

Writers from the rest of the world could be equally blessed with the gift of literature mind and sharp observation power. In the meantime they are also pre-set by the norms of the society where they have grown up that may subject their works to cultural bias.

It is only through reading native authors people can near the full appreciation of the complexity of African history, society and culture. Aesthetically, their works are a synthesis of regional, ethics and cultural customs that dated back to different times throughout African history, creating a facade of "magic realism."

"People often called something they can't understand as magic realism," said Mia Couto, a Mozambican writer, whose works have been published in Chinese.

The African authors who are concerned most of all with an independent cultural identity often insist that African culture needs a leader to rid itself of western influence. Regardless of the means to that end, the western power that colonized the continent has regularly been targeted as being "arrogant and ethnocentric," as is the case in Chinua Achebe's works.

This struggle with the colonial background is not only manifest in the books, but also in the making of them. Achebe actually wrote his masterpiece in English. And the book was first published in London before it worked its way back to the continent and became the most widely studied work in Africa.

Achebe was the first African writer who painted a non-romantic picture of this tribal life without apologizing for the bad, or praising the good, said Nesrine Malik, a critics from the Guardian.

But the colonial history has seared its mark in the cultural transition of the land. The success in demonstrating this complexity of the change is also part of the reasons that some African authors are recognized worldwide, even by the Nobel Prizes.

Six African writers having been awarded by Nobel Literature prize, most of them grew up in post-colonial Africa and studied European works that are more ample in documenting the history of Africa than the indigenous interpretation. Naturally, the economic superiority of the colonial power had spilled into the writing about history.

Wole Soyinka, a Nigerian playwright, poet and essayist, was awarded the 1986 Nobel Prize in Literature. He was the first post-independence African to be honored in that category.

For more than 40 years, much of his writing has been concerned with "the oppressive boot and the irrelevance of the color of the foot that wears it."

Death and the King's Horseman (1975), a play took place in Nigeria during British colonial rule, depicts a story about the horseman's prevention from committing ritual suicide by the colonial authorities. According to the local tradition, the death of the king must followed by the ritual death of the king's horseman as well as the king's dog and horse since the horseman's spirit is critical to help the king's spirit ascent to his afterlife. While the suicide was viewed by the British controller as barbaric and illegal.

The Nobel Prize in Literature for 2003 was awarded to the South African writer John Maxwell Coetzee "who in innumerable guises portrays the surprising involvement of the outsider." The press release for the award also cited his "well-crafted composition, pregnant dialogue and analytical brilliance," while focusing on the moral nature of his work.

In his 1999 novel, Disgrace, Coetzee explored an unsolved tensions of the post-apartheid order. The novel is about a divorced university professor in Cape Town, David Lurie, "who is caught up in a sexual harassment scandal with his student and goes to stay with his daughter, Lucy." One day three black strangers asked for help to Luch and raped her. After finding herself get pregnant, she chose to have the baby but refused to charge the culprit. Meanwhile, she continues to work on the farm with her family which is harboring one of the rapists. Even though thinking it was humiliating, Lucy had to accept it.

After the book published, Coetzee was accused by the African National Congress since it representing "as brutally as he can the white people's perception of the post-apartheid black man and of implying that in the new regime whites would lose their cards, their weapons and dignity." While the white women will have to sleep with "the barbaric black men."

Nadine Gordimer, a south African writer and the recipient of the 1991 Nobel Prize in Literature, was recognized as a female "who through her magnificent epic writing has in the words of Alfred Nobel-been of very great benefit to humanity."

Most of her writing dealt with moral and racial issues, particularly apartheid in South Africa, with her integrity and observation about the South African.

"Gordimer writes with intense immediacy about the extremely complicated personal and social relationships in her environment. At the same time as she feels a political involvement – and takes actions on that basis – she does not permit this to encroach on her writings. Nevertheless, her literary works, in giving profound insights into the historical process, help to shape this process," the press release of the award in 1991 said.

In her first published novel, The Lying Days (1953), was about a semi-autobiographical story taking place in a mining town in Africa, similar to Gordimer's hometown in the childhood. The novel charting the growing "political awareness of a young white woman towards small town life and South African racial division."

Doris Lessing, awarded the 2008 Nobel Prize in Literature, was described by the Swedish Academy as "that epicist of the female experience, who with skepticism, fire and visionary power has subjected a divided civilization to scrutiny."

Over the course of a distinguished 30-year writing career, she has led her followers into worlds of colonialist Africa, the tangle of emotions binding women and men, social breakdown, mental breakdown and even nuclear disaster, John Leonard, a book critic of The New York Times, said.

Most readers of Lessing regarded her book The Golden Notebook (1962) was a feminist bible largely because of the portrait of strong women leading independent lives.

Naguib Mahfouz, winning the 1988 Nobel Prize for Literature, is regarded as one of the first contemporary writers of Arabic literature.

The Swedish letter to Mahfouz said that "rich and complex work invites us to reconsider the fundamental things in life. Themes like the nature of time and love, society and norms, knowledge and faith recur in a variety of situations and are presented in thought-provoking, evocative and clearly daring ways."

His Cairo Trilogy, a trilogy of novels, include Palace Walk, Palace of Desire and Sugra Street. The protagonist, a university student in the beginning, lost his faith in religion and in love in the first novel but  keeps searching for the meaning of his life.Then he lives as an outsider in his own society in the second and third novels. Throughout the trilogy, the author developed his themes: "social progress will be the result of the evolutionary spirit of humankind."

"Today mother died. Or maybe yesterday; I can't be sure."

It is a very famous opening of the novel, The Stranger (1942), written by Albert Camus, an author, journalist and philosopher born in French Algeria who won the Nobel Prize in Literature at the age of 44 in 1957.

In the book-length essay, The Rebel, Camus examined both rebellion and revolt in personal and social frames. Also, Camus introduced "several counter-cultural figures and movement from the history of Western thoughts and art," emphasizing the importance of each in the development and revolutionary thought and philosophy. As one of the existentialists, Camus focused most of his questions around existentialism. The absurdity of life and death have been highlighted in many of his works.

For people who have never set foot on Africa, in the fictional world presented by these literature, they might figure out what these lands truly are.