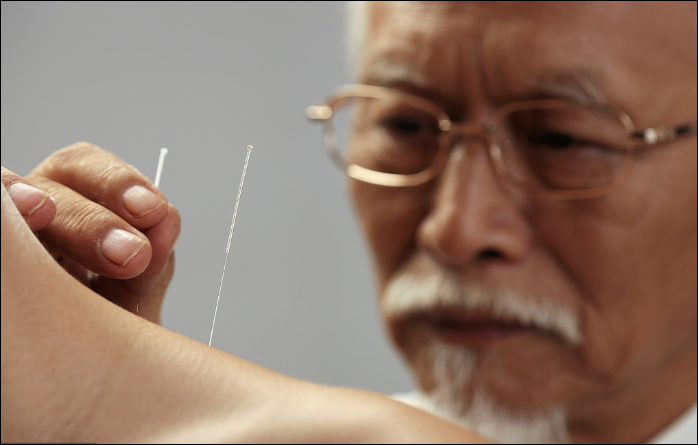 An acupuncturist inserts a needle through a patient's skin. (Photo: VCG)

Inserting needles through the skin may sound scary, but acupuncture and moxibustion, two key components of traditional Chinese medicine (TCM), are said to boost the recipient's health and well-being.

Added to UNESCO's representative list of Intangible Cultural Heritage of Humanity in 2010, acupuncture and moxibustion are widely practiced in China. Their format and practice have distinctive regional characteristics and they have a precious heritage based on Chinese culture and science.

Theory of acupuncture and moxibustion

The theory of Chinese medicine believes the human body is a small universe with its own circulatory system, and in this system, there are acupoints connecting the channels. By stimulating these acupoints, the self-regulating functions of the human body can be promoted.

Acupuncture refers to the practice of inserting needles (usually filiform needles) into the body of a patient at a certain angle and using techniques such as twirling and lifting the needles to stimulate acupoints to treat diseases.

Moxibustion normally refers to placing moxa cones directly on acupoints or holding moxa sticks at a distance to warm the body.

Application of acupuncture and moxibustion

Acupuncture and moxibustion have a wide range of applications.

In 1995, the World Health Organization published 43 conditions that can be treated by acupuncture and moxibustion, including diseases of the respiratory system, ophthalmic, oral, gastrointestinal system and neurological, muscular and skeletal diseases.

Many people also use acupuncture to treat acne or lose weight.

TCM has become more and more accepted by other countries in the world. According to China's white paper on TCM, the practice has spread to 183 countries and regions worldwide.