CULTURE Preserving the pages of history

Preserving the pages of history 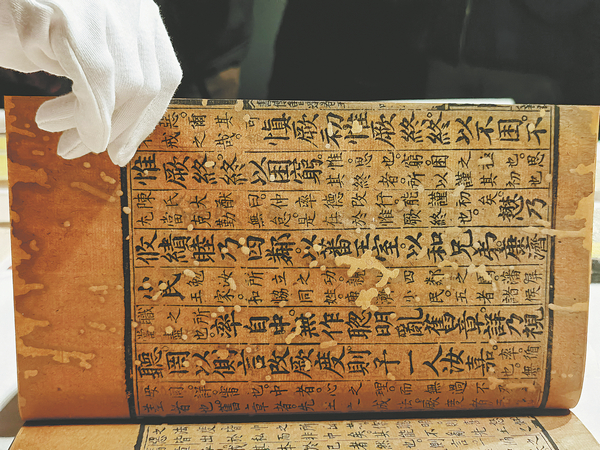 A newly restored Ming Dynasty book, from the Tianlu Linlang collection, upon which blemishes caused by bookworms are recognizable. (Photo: China Daily)

For eight years, Cui Zhibin concentrated on these ancient pages. She had been looking for every possible way to prolong their lives, once fragile and even on the verge of being, literally, torn apart by time.

As a restorer of ancient books at the National Library of China in Beijing, the 35-year-old gets emotional when recalling the almost 3,000 days she spent fixing Tianlu Linlang, a precious literary collection, including 600-odd volumes of ancient books, which were once in the former inventory of a Qing Dynasty (1644-1911) royal study.

"This project will remain an important part of my career," Cui says. "It will always be a key component of my life, too."

Thanks to the efforts of Cui and her colleagues, on Jan 7, it was announced that the restoration of Tianlu Linlang was completed in the end of 2021－news that was widely hailed in the industry of ancient Chinese book restoration as a milestone.

"The most challenging part was that we had to draft a tailored plan for each copy, considering that their sizes, colors and materials vary greatly and their ages span centuries," Cui recalls.

Compared with more renowned tomes in China, such as the Dunhuang manuscripts dating to the Tang Dynasty (618-907), which were found in one of the Mogao Caves in Gansu province, and Yongle Dadian from the Ming Dynasty (1368-1644), the world's largest paper-based encyclopedia, Tianlu Linlang is not among the best-known ancient books that were restored by the national library in recent years.

Nevertheless, Zhu Zhenbin, who has worked at the National Library of China for over 40 years as the leading restorer of Tianlu Linlang, agrees the newly finished project was a greater challenge.

"Most ancient tomes, like the Dunhuang manuscripts and Yongle Dadian, were written within the same period of history, sharing similar format and paper," Zhu explains. "Once you make a restoration plan, it can work for every volume."

But due to the ambitious book collection plan of a Qing Dynasty emperor, the situation of Tianlu Linlang got complicated.