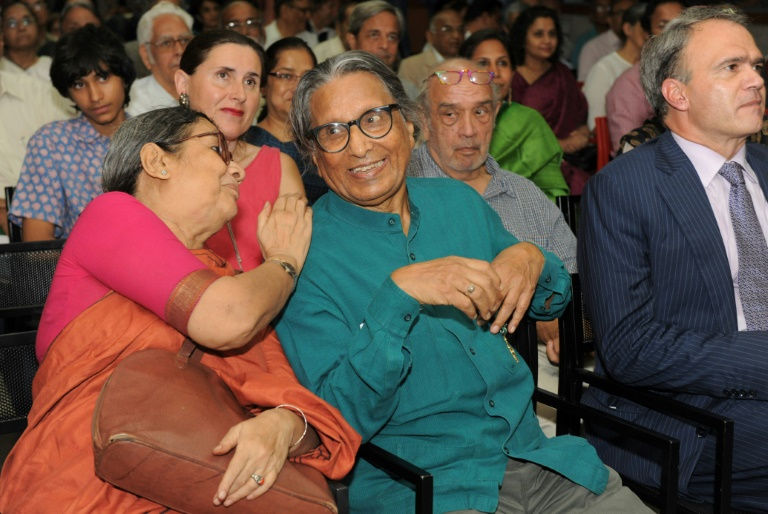 The 90-year-old Doshi -- one of the last living architects to have apprenticed with the Franco-Swiss trailblazer Le Corbusier -- distinguished his work by committing to sustainable architecture and inexpensive housing, bringing modernist design to an India rooted in traditionalism.

He is the 45th Pritzker laureate and the first from India.

"Balkrishna Doshi has always created an architecture that is serious, never flashy or a follower of trends," said the Pritzker jury, which said Doshi "has continually exhibited the objectives" of architecture's highest honor.

"Balkrishna Doshi constantly demonstrates that all good architecture and urban planning must not only unite purpose and structure but must take into account climate, site, technique, and craft, along with a deep understanding and appreciation of the context in the broadest sense," the jury said.

"Projects must go beyond the functional to connect with the human spirit through poetic and philosophical underpinnings."

Over the course of his career spanning six decades Doshi developed an architectural style that considered human needs as well as sociocultural context, all while infusing his designs with Modernist elements that reflected what he called "contemporary expression for a sustainable holistic habitat."

His accomplishments include everything from working on the Indian Institute of Management to designing the Aranya Low Cost Housing bloc in the city of Indore, completed in 1989 in the Indian state of Madhya Pradesh.

The intricate labyrinth of houses, courtyards and internal trails today houses some 80,000 low- and middle-class people, with more than 6,500 units ranging from modest one-bedrooms to spacious homes.

"It seems I should take an oath and remember it for my lifetime: to provide the lowest class with the proper dwelling," the architect said in 1954.

"My works are an extension of my life, philosophy and dreams trying to create treasury of the architectural spirit," Doshi said in a statement thanking the Pritzker jury, in which he also cited the influence of Le Corbusier.

Exhibiting an aptitude for art and an acute sense of proportion at a young age, Doshi began studying architecture in 1947, the year India gained independence.

Working under Le Corbusier, he returned to his native country in 1954 to oversee two of his Modernist guru's projects in Chandigarh and Ahmedabad. The Indian architect also collaborated with Louis Kahn, another of the 20th century's Modernist giants.

The laureate's son-in-law and partner Rajeev Kathpalia told AFP the family is "honored and thrilled" to receive the Pritzker news, calling Doshi "one of those rare architects who has worked with all spectrums, a wide range from urban planners to slums and beyond."

"He is passionate about everything that is alive. His name is Balkrishna, which means 'child Krishna," Kathpalia said.

"And like a child, he is always curious about everything. It is as if he is growing young as we grow older."

Doshi's many accolades include the Officer of the Order of Arts and Letters and France, which he received in 2011, as well as the 2007 Global Award for Lifetime Achievement for Sustainable Architecture from Paris's Institut Francais d'Architecture. In 2000 he won India's Prime Minister National Award for Excellence in Urban Planning and Design.

The international Pritzker prize, established by Chicago's Pritzker family in 1979, bestows laureates with $100,000 along with a bronze medallion.

Calling the preeminent award "deeply touching and rewarding," Doshi said the recognition reaffirms his belief that "life celebrates when lifestyle and architecture fuse."

"Every object around us, and nature itself -- lights, sky, water and storm -- everything is in a symphony," said Doshi.

"This symphony is what architecture is all about."