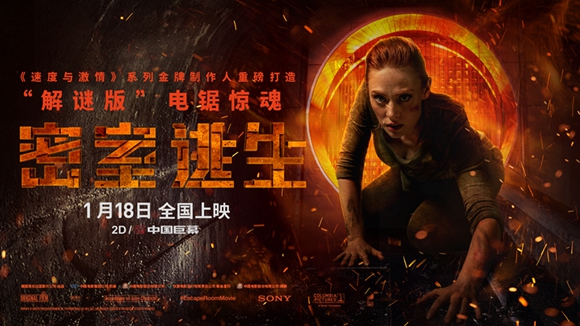 Hollywood producer Neal H. Moritz has told China.org.cn he loved the experience of making the latest suspense thriller "Escape Room," and would love to cast Chinese actors in the future projects.

"We've been lucky enough to be very successful in China with 'The Fast and the Furious' movies and I think if you liked [them], you're going to love 'Escape Room'," Moritz said in Beijing on Wednesday,

"It's a huge action thriller with a lot of breath-holding moments. It's a total immersing cinematic experience. The audience can scream together, laugh together, yell at the screen together, and have fun together. "

Directed by renowned horror film director Adam Robitel, "Escape Room" focuses on six players invited to the Minos Escape Room Facility with the chance to win US$10,000 should they succeed in escaping. However, after the game starts, everything goes out of control, and each room is filled with deadly challenge.

The audience has to guess who can escape this deadly maze, who is the one manipulating things behind the scenes, and anticipating what hidden secrets lurk in the darkness within the heart of each player.

Moritz and his young team, as well as others associated with them, had previously played various escape games, "We started talking about why they were so popular and we why we just love the experience of escape rooms. That led to talk about how we could turn this into a movie," the producer explained.

Then, screenwriter Bragi F. Schut came in and had a really good idea about how it could be achieved.

"When I got the screenplay, I was really impressed about how he was able to take the idea of the escape room and turn it into a movie that flows and is full of surprises and really interesting characters," Moritz said, "It just was one of those scripts that could make me sit on the edge of my seat and just keep turning the page because I was so interested to see what was going to happen next.  It was just like, I've got to make this into a movie and I was lucky enough that the studio wanted to make it."

One of the highlights of "Escape Room" is the room designs, their details being delicate and stunning. In the second half of the movie, the suspense begins to make both the characters and the audience feel increasingly nervous. Players who were united at the start gradually become more divided, revealing of dark side of human nature in a breathtaking way.

Of course, the film is not the first of its kind, as there have been many classics before, including "Cube," "The Maze Runner" and "Saw." However, Moritz said that, although he liked these classic works, he thought "Escape Room" was more a thriller than a horror film, and less bloody and more cerebral.

"We never really saw this as a horror film, and we didn't really see the need for a lot of blood. To me, it's what you don't see sometimes that makes things scarier than what you do see, since we don't really know who's behind this all and who's making our characters go through this whole crazy journey almost like a roller coaster ride," the producer added.

Each character in the film has a distinct personality. They are a physics student, stock boy, trader, war veteran and former miner and escape room enthusiast. These six people have different backgrounds and charms, and there is a certain chemistry when they get together. Although the actors are not big movie stars, they had great resumes in many American TV series, such as Taylor Russell from "Falling Skies", Deborah Ann Woll from "True Blood," Jay Ellis from "The Game" and Tyler Labine from "Dead Last."

"We just wanted really good actors and we wanted actors that kind of represented a lot of different people who were going through a lot of different things in their lives. I think that Taylor Russell was so fantastic, but they were all really good; they were really surprising and exciting new actors who are really doing incredible things. So, to put them all together in a movie was just really satisfying to see as a group how they all came together," Moritz said in admiration.

Since the film was released in North America and other markets on Jan. 4, it has taken in more than US$37 million in global box office as of Jan. 16. After being released in China on Friday, it earned 13.64 million yuan (US$2.01 million) on the opening day, highest among all new releases in the market. It also scored 8.8/10 and 7.4/10 in moviegoer ratings respectively in ticketing platform Maoyan and film review site Douban.

Moritz said he was satisfied with the both box office returns and word-of-mouth results so far and a sequel will possibly be considered. "I would love to make a sequel, and there's a lot of things we could do in [it]," he said, adding he knew the escaper game was also popular in China, so it would be possible to recruit good Chinese actors and even shoot the future projects in the country.

"The film production was one of the best experiences of my life and, you know, what makes it the best experience is that when we show it to audiences, [they] just love the movie and as a filmmaker you know it is the ultimate compliment."