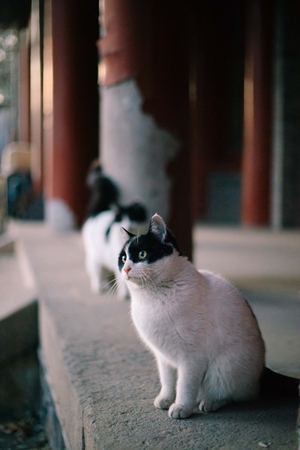 An online profile about stray cats by Peking University has recently captured public attention with elegant shots of these furballs and a look at the cats' personalities and their relationship with strangers and other stray cats on campus.

The mini-program, a sub-application on Chinese social media platform WeChat, was developed by the Peking University Student Stray Cats Care Association. It grouped the stray cats on the campus of China's top university into categories such as "current students" (those who are still wandering around on campus), "alumni" (those who have been adopted), "star students" (in memoriam) and those who have been reported missing.

Each cat has its own page detailing information like name, nickname, description of its appearance, its neutering condition and whether it likes to be approached by people.

On the page of the cat named "Yellow Duckie," besides his basic information and his life story, readers can click on the buttons and listen to the recordings of its "meow." In describing his relationship with other cats on campus, it goes "Have good ties with the Jiexi family, but always getting into a fight with Yunwu, and frequently losing." Then there are the links taking readers to the pages of the cats of interest.

The mini-program is a collective and continued effort from members of the association.

"The program designer is a student from the College of Engineering of our university. While he had some basic knowledge about programming, he went to the library and did some research to build the framework of the mini-program. And the other members of the association helped collect the information about the stray cats," Fan Hanyun, chairman of the association, told the Global Times Thursday.

Due to the COVID-19 outbreak, the students are still taking online classes instead of returning to campus. The mini-program was originally linked to the campus network. The mini-program was so popular that it could get more than 600,000 hits within an hour. The association had to switch and pay for another server to avoid affecting the online courses.

The hashtag of the mini-program has reached more than 38.58 million views on China's Twitter-like Sina Weibo. Many netizens were enthralled by the cuteness of the cats and the sophisticated social network of the stray cat circle on campus, saying they'd love to visit the cats in person when the pandemic ends.

"During the pandemic, the members of the association who stayed on campus would continue feeding the stray cats. Other students and teachers have joined to help as well. We've been making sure to walk down our designated route around the campus and feed the cats every two days given the staffing shortage. We used to feed them once a day," said Fan.

Besides feeding the cats and building an online profile for them, the association has been dedicated to helping the cats with neutering and adoption.

While netizens are praising the efforts the students put into taking care of the stray cats, many called for stronger legislation against animal cruelty when looking back at a horrible event earlier this month, in which a college student in East China's Shandong Province was expelled for cat torture videos.

Fan noted that everyone should respect life and hoped more and more people can pay attention to the issue of stray animals in China.