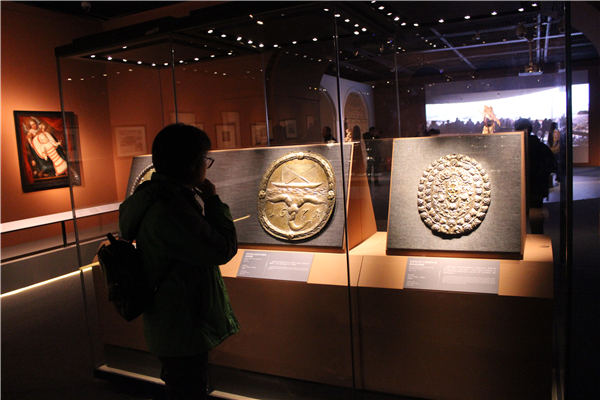 A visitor looks at funerary shields from 17th-century Silesia at a new exhibition at the Capital Museum in Beijing, displaying 76 artworks and handicrafts from the collection of the National Museum in Wroclaw. [Photo by Wang Kaihao/China Daily]

From 1618 to 1648, the Thirty Years' War, which originated from conflicts between Protestants and Catholics in Central Europe, grew to be one of the most destructive wars in human history.

It almost razed Silesia to the ground.

However, this historical region, much of which is part of modern-day Poland, did not surrender to this catastrophe. After the war, it rose again and soon became one of the most economically vibrant regions in Europe.

A new exhibition at the Capital Museum in Beijing, which opened on Dec 18 and will run through March 24, tells a story of revival.

Silesia Rediviva: The Baroque Period in Silesia displays 76 artworks and handicrafts from the collection of the National Museum in Wroclaw.

Wroclaw is a city in Western Poland and the cultural center of Silesia. As 2018 marks the 100th anniversary of Poland regaining its independence after the end of the World War I, it is seemingly meaningful that the exhibition opened just before the New Year.

According to Piotr Oszczanowski, director of the National Museum in Wroclaw, the exhibits are selected from "the most precious highlights" in the museum's collection of around 200,000 cultural relics. Though the museum only has a 70-year history, he proudly notes that the institution has become one of the most popular historical museums in Poland.

"After the (Thirty Years') War, Silesia once again became a regional powerï¼�Something that is fully proven through these exhibits, which also show that it was a peak time for fine art," he says.

He hails close cooperation between the exhibition's curators from China and Poland. They jointly present artifacts, including paintings, weapons and everyday items, to paint a full picture of Silesian society in the 17th century. 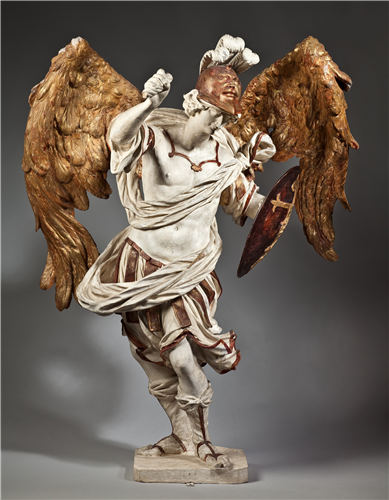 Polish cultural relics on show in the Capital Museum include a statue of the archangel Saint Michael. [Photo provided to China Daily]

Zhao Yazhuo, Chinese curator of the display, has designed three sections for the exhibition.

"We want to show the diversity within the elite class in the first section," she says. "For example, the Polish aristocrats, deputies of the Holy Roman Empire, the rising bourgeois, the Catholic Church â€¦they made the political atmosphere in Silesia really complicated."

Consequently, portraits of aristocrats and the social elite from different backgrounds have been carefully selected for this section of the exhibition to reflect a cross-section of the region's upper class. The eyes of one portrait of a lawyer can "roll" due to a clock pendulum installed in the painting. Zhao explains that such a gadget shows people's pursuit of novelty during a time when the Baroque aesthetic was favored.

She added that Silesia was dominated by Protestants before the Thirty Years' War. However, it was controlled by the Catholic Church afterward, which gave impetus to a booming period of passionate Baroque art in the region.

The second section of the exhibition is focused on the most representative works by Silesian artists. For instance, though sculptor Matthias Steinl was from Austria, he left many works in the churches of Silesia. A set of six angelic choir statuettes and a statue of archangel Saint Michael are probably among the best examples of his work and show why he acquired his reputation.

The third section, which displays ordinary people's belongings, however, may be the best demonstration of Wroclaw's rebirth. The funerary shields from different industry guilds are displayed in the center of the hall. They were used to pay posthumous homage to a citizen's lifelong devotion to their jobs. The prosperity of a city cannot ignore each laborer's contributions.

Polish cultural relics on show in the Capital Museum include a copper wine pot. [Photo provided to China Daily]

"The flourishing guilds indicate the economic boom in Europe at that time," Zhao says.

Bai Jie, head of the Capital Museum, points out that Poland and China share a common history of winning liberation after long struggles, which will create an emotional resonance among visitors.

The Capital Museum and the National Museum of Wroclaw became sister museums in 2016, providing a launchpad for a series of cooperative projects.

From December 2017 to March 2018, Chinese People's Life in the Late Ming Dynasty (1368-1644), an exhibition on loan from the Capital Museum, was showcased in the Polish museum. It introduced visitors to the lives of China's literati, social prosperity and people's religious beliefs from the 16th to the 17th centuries. More than 30,000 people visited that exhibition.

Bai says the promotion of mutual learning between Chinese and foreign civilizations is a key theme in designing exhibitions in his institution.

"The exhibitions enable the Chinese public to learn about other peoples' great spirits, growth and contributions to all mankind," he says.