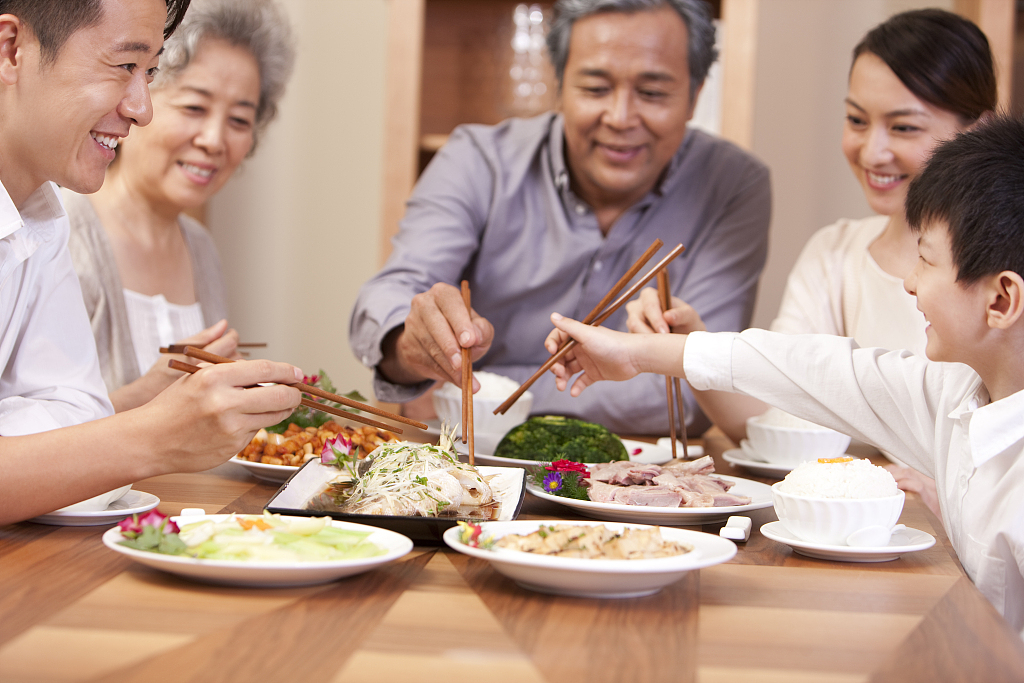 Chinese dining table culture is very emotional. The elders' love for the children is often reflected in the act of clipping food into their plates, sometimes even feeding it directly into their mouth. (Photo: VCG)

The pandemic has kept people from gathering, and the idea of a safe distance from one another is taking hold. The impact of this highly contagious disease on the catering industry is obvious.

During the pandemic, a family dinner in Nanjing led to nine people being infected one after another, while a group of friends in Nanchang who regularly ate meals together, leading to 52 people receiving medical isolation and nine people being diagnosed.

In this situation, infections caused by dinner parties were common, which also made people reflect on safety at dining tables while reducing gathering. In particular, the shared-meal culture that the Chinese are used to is a high risk during the outbreak.

In Chinese food culture, people are used to sharing dishes. For Chinese people, this form of dining is not only for the sake of eating but also for the purpose of communicating with each other.

It is conceivable that this kind of eating habit means everyone's chopsticks contacts their mouth and then enters the same dish, which is an easy way for the transmission of bacterium viruses such as helicobacter pylori and hepatitis, not to mention the highly contagious novel coronavirus.

It pointed out that public tableware such as spoons or chopsticks, which are used to scoop (clip) dishes when two or more people share a table, the chopsticks shouldn't make contact with the mouth. The length, color, logo and other aspects of the production are all regulated.

Not only Taizhou, a number of provinces and cities have also released a public chopsticks initiative.

Beijing Health Commission issued a proposal to encourage citizens to eat separately and use public chopsticks.

Chinese dining table culture is very emotional. The elders' love for the children is often reflected in the act of clipping food into their plates, sometimes even feeding it directly into their mouth.

For many, the use of public chopsticks deliberately stretches the distance between each eater and, if this concept is not reversed, it will be hard to promote their use.

With the resumption of the catering industry, maintaining good order while eating and doing so healthily has become a real problem.

The promotion and use of public chopsticks and spoons may also lead to the change in food culture, and foster a life concept and behavior that are compatible with social progress.