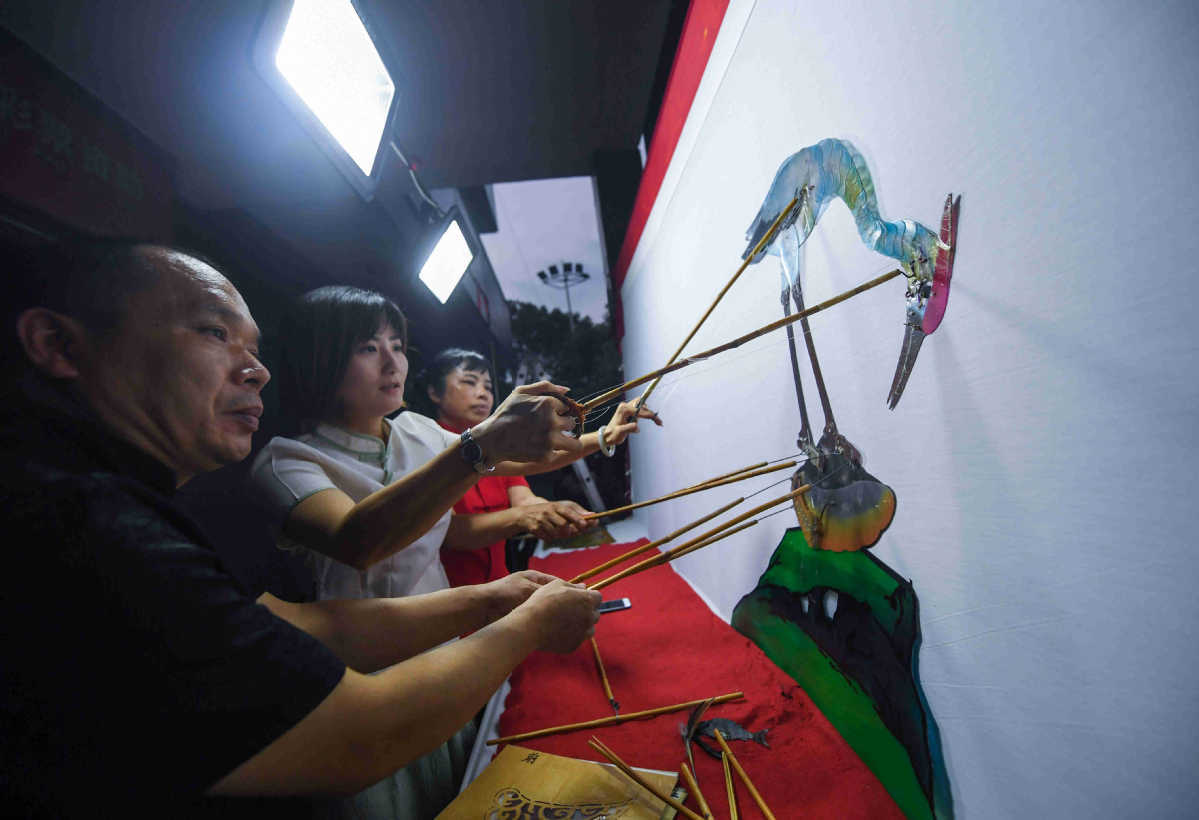 HANGZHOU－As Ji Tianyuan manipulated the strings of a puppet to reenact a scene from classical Chinese theater, a toddler barely bigger than the marionette watched intensely.

Ji is a puppet maker in Taishun county, Zhejiang province, where the craft has a history of over 600 years. The show she was performing on a local bridge has been staged in multiple countries.

As an inheritor of the craft of carving puppet heads, which is classified as a national intangible cultural heritage, Ji is eager to promote puppetry.

She was born into a long line of craftsmen. When she was a child she watched her father carve the puppet heads and paint their faces. "I gradually became interested and later my father signed me up for painting and calligraphy classes," Ji said. "Because of him, I started my career in puppet making."

At her home, Ji has a cabinet displaying her father's works.

"You can see some of my father's influence in my works. He used to watch me make puppets and help me whenever I had problems," she said.

Now Ji has a workshop of several square meters in her attic, with two lamps and a wood storage area.

Ji designs, carves, styles, paints and makes the clothes for all her puppets. It can take several months to produce one.

"Each puppet is unique and they are like children to me," she said.

The final products are displayed in rows in a small room. The puppets include many famous characters from Chinese novels written in different dynasties.

"Sometimes I imagine if they all came to life they would probably be baffled by what dynasty they are in and start to argue, as some characters are friends, and some are complete strangers," Ji said.

In recent years, Ji and local craftsmen have been making adjustments to what the puppets can do, such as enabling them to play traditional musical instruments or perform face-changing routines, a subgenre of traditional Sichuan Opera.

Wei Chaohao, the founder of a local puppetry troupe, incorporates social issues into the shows, such as plays with an anti-drugs message.

During the COVID-19 epidemic, he also created puppet shows to remind people to be mindful of their personal hygiene, wear masks and wash their hands often, which became popular on social media.

Last year, the local government opened a class on performing puppet shows and invited inheritors like Ji to teach.

"We hope that the puppet shows can be passed down to later generations, and still retain their unique charm," Ji said.